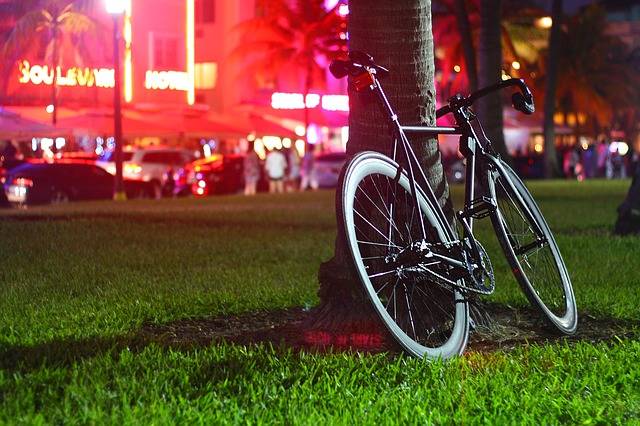 By sonumonuPosted on Posted in CyclingTagged Beginers Info, Hybrid BikeNo Comments on Why Do Fixed Gear Bikes Have No Brakes?

Traditionally fixed gear bikes have no brakes on them and for a good reason. For most of the past, it was only a fixed gear bike that was used for a competitive bike race.

Having a brake in track bikes does more damage than not having them altogether. Image what will happen if a person upfront suddenly applies brakes in the middle of race event?

It would be dangerous as probably you and everyone behind will crash into each other. Maybe the crowd would have some fun but it really hurts; trust me. This is the reason why brakes are baned on tracks.

Some included just to satisfy local rules while some on-demand from customers. In fixed-gear bikes, you use your leg or peddle to stop rather than using brakes that too does not guarantee safety.

As the fixie craze has taken off all across the globe; people are also asking just why do they not have brakes?

Because they do not have many moving parts these bikes are quite cheap, easy to maintain and are less attractive to thieves. Since there is a sense of responsibility and risk involved; riding it is a fun and thrilling experience.

Before we discuss how having no brakes help with its reputation and ride; let us first discuss what a fixie is, recent trends and its brief history.

What Is A Fixed Gear Bike Or Fixie?

A fixed-gear or fixie bike is a type of single speed bike that has no freewheel mechanism. This means you cannot coast and your pedal moves as long as the wheel is moving.

Being one of the oldest bike types it is probably the forefather of all bike types present today. Here the absence of the ball bearing disallows wheels to turn on the cog.

A fixie bike is fun to ride, looks slick and nice, robust in design, lightweight, maintenance-free and more efficient. This means you get faster speed for the amount of effort put in.

These bikes are idle for lower body exercise, endurance training, racing, and daily commute. Most like by riders who want a lightweight bike with no-nonsense riding requirements.

While most fixies are just a basic mechanical device with one fixed gear. Many brands come with brakes included and flip-flop hub; to switch between fixed gear and freewheel.

Since this bike does not have a freewheel and does not cog; you can do many interesting things with this bike. For example, it can be run backward, can do bar spin and 180 bunny hop.

Why Ride A Fixie?

Why Are Fixies So Popular?

Used for so many years it was the hippies that made this cool and popular. That is why it is sometimes also called a trendy hipster bike. Fixies come from sports and first adopted by the bike-messengers.

They were mostly adopted by these bike messengers for their convenience and low maintenance. later hipsters adopt them for its slick design, classic look and ability to perform different stunts.

It has been part of various cultures like that of bike messenger culture, hipsterism, and modern urban culture. They all kind of blend in together forming a new subculture of fixed gear biking.

In modern times it is liked by most fitness buffs because of its ability to boost results of bicycle workouts. Road riders like it because of its customization, comfort, control, and simplicity.

I personally like my fixie for its low maintenance needs. You just need to keep your tires in good condition; that’s it! Other than that it has a retro feel and helps develop a smooth pedaling style.

Are Fixed Gear Bikes Illegal Due To No Brakes?

No, your brakeless fixie bike is not illegal in simple terms; but there are some local laws that restrict their use other than on tracks. For example, in many US states, fixies must have a rear brake.

Similarly, it is illegal for any bike to run on the road without two sperate brakes. Mostly one forward and other for the rear wheel. This makes a brakeless fixie illegal to ride in the UK.

Similarly, it is illegal in most European countries for example; Denmark, France, Germany, Austria, Belgium, Poland, Spain, Italy and Netherlands which too require fixies to have brakes.

On the other hand, there are countries like Australia which on one hand do not restrict one to ride a fixie without brakes but fine companies which sell them without brakes.

Luckily you can comply with these rules by installing brakes on your bike. It’s easy and there is always a ton of helpful articles and youtube video to help. I have installed a front brake for $50 from a local bike shop.

So yes it is legal to buy and use fixie bikes but it better be with brakes installed. While on the other hand if you are buying it to practice on tracks; it’s legal everywhere. In fact, it is globally considered illegal to ride on tracks with a mechanical brake.

How To Apply Brake On A Fixe Bike

Well, you just learned why many fixies came with brakes preinstalled. But what if it doesn’t; how will you apply brakes on a fixie? Good news stoping a fixed gear bike is easy to do.

You just need to use your peddle, weight and legs to stop your bikes. A fixie without a front brake can be stoped by four ways; the skid stop, slip stop technique, back peddle/backpressure and a typical rear hand brake.

The simplest of them is applying the rear hand brake followed by skid technique, back peddle and slip stop. Skid stops can be done with or without any form of foot retention, but for the other two, you need one.

For skid stops, you need to lift a little from the saddle bending forward and lock pedals to their position. Now as you stop pedaling the rear wheel stops and skid till the front one stops.

In back peddle you need to restrict the wheel motion by applying a little backpressure. You basically put pressure with your legs against the forward momentum of the bike and peddle.

For the slip stop technique, you need to have a little experience with fixies. Just raise on your seat bending forward as to lift the back wheel in the air. Once the back wheel raise about the ground apply a quick back peddle and your fixie will stop.

I believe no matter if it is required by law or not; one should always have an additional hand brake installed when used on road, especially when he or she is a beginner.

Best Step Through Bikes For Seniors 2022

Fixie vs Road Bike: Are Fixies Faster Than Road Bikes?

Why Fixed Gear Bikes Are Good For Commuting