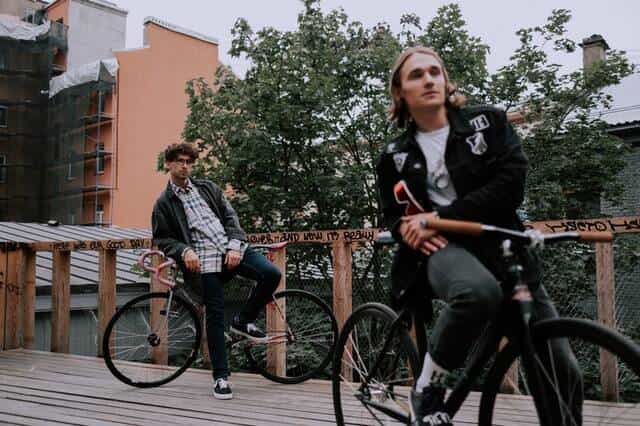 By sonumonuPosted on May 26, 2022Posted in Cycling2 Comments on Fixie vs Road Bike: Are Fixies Faster Than Road Bikes?

When it comes to speed, fixed gear ( fixie ) and road bikes have many relevant features in common. They tend to have the same smooth, skinny wheels for reduced road resistance and a more aerodynamic profile. Their frames are lightweight, making it easier to accelerate.

But, there is where the fixie stops, and the road bike continues to add more features and attachments. Complex drivetrains feature derailleurs, full rear cassettes, and a stack of chainrings.

All of this is meant to increase the bike’s performance. The humble, inexpensive fixie lacks all of these bells and whistles, so you would expect it to lag far behind the road bike.

But does it? Of the two, which is actually the fastest?

While they are two distinct styles of bike, it’s fair to compare them. They are both marketed as excellent choices for commuting, and what commuter isn’t concerned about how fast their ride can get them to work?

So, let’s mount up and start pedaling our way through this comparison, starting with the seeming underdog: the fixie ( just how fast it can go ).

How Fast Can Fixie Bikes Go?

When you do your cycling atop a fixed gear bike, your maximum and average speeds depend heavily upon the design of your bike.

The wheel diameter, the size of the chainring, rear sprocket, and cranks all impact the velocity you can realistically expect to achieve.

The measurements of the chainring and the sprocket furnish your gear ratio.

This figure, which is reached by dividing the teeth in the chainring by those in the sprocket, tells you how many times the wheel will spin per turn of the crank as you pedal.

A larger, more “toothy” chainring yields greater speeds. To find the theoretical max of a fixie, let’s assume our bike has a gear ratio of 50/11, or 4.55, which is a common high gear setting on multi-speed bikes. Based on this alone, you could expect a max speed of 32.8 mph.

There are more variables. A lower wheel diameter will require a higher gear to achieve the same top speed. Shorter cranks allow you to expend less effort to accelerate and maintain your cadence.

Of course, you can reach even higher speeds riding in the draft of a rider ahead of you, or when going downhill. Riders routinely reach speeds of 40-45 mph on declines. It’s possible to go even faster, but it can become unsafe.

Fixed Gear Vs Road Bike: Which One is Faster?

When comparing fixies and road bikes, the mechanisms that govern their speed are fundamentally the same. Yes, road bikes have multiple gears, but a fixie could have any one of those gears as well.

It can also have the same sized tires and cranks.

So, if you match the gear ratios and other relevant proportions, a fixie can travel just as fast as a road bike when it is in that same gear. In fact, the fixie has an advantage in such a comparison.

They are lighter bikes thanks to having such a simplified drive train. Because of this, they can even outpace their road bike competition.

But, that represents a best case scenario. Assume once again that the fixed gear bike has a 50/11 gear ratio. That high gear is great for speed on level terrain.

However, it’s much harder to pedal up an incline using such a demanding gear. A road bike can simply switch to a lower gear, allowing the rider to maintain cadence in all scenarios.

This means that road bikes have a more consistent average speed over different terrain, and will be faster overall. You can choose a fixie with a more moderate gear ratio, but the fact remains that no single gear is ideal for all circumstances. If your fixie is not stymied by hills, it will underperform on straightaways.

Yet, cyclists choose fixed gear bikes when they are appropriate to the terrain. And, in such cases, fixies average the same 15-16 mph as other bikes.

Should You Get a Fixie or Road Bike for Everyday Cycling?

Choosing between a fixie and a road bike comes down to two things: terrain, and preference.

If your daily ride is on mostly level ground, then a fixie could be your best bet. The significant weight advantage not only gives it the edge in speed here, but makes it easier to handle in general.

However, if you expect to encounter hills every day, a road bike is a better choice. A fixie can be ridden in this circumstance, but it’s inefficient when transitioning between level terrain, inclines, and declines.

Road bikes are the more conventional choice. They have more complicated parts, but that’s the tradeoff that allows you to control the effort required for you to ride. That adaptability is their main advantage.

That said, you may prefer a bike that requires more effort from you.

Many enjoy the exertion required to power a fixie up a hill, or to get a lower-geared bike up to speed on a flat stretch. The limitations can actually become selling points.

That goes for other features as well. The lack of gears and cables cluttering the frame of a fixie can appeal to your aesthetic sense. Want a trick bike? Fixies can be pedaled forward and backward. Looking to save a little money? Fixies are generally cheaper.

What’s the Point of a Fixie Bike?

Riding a fixed gear bike means constant activity. If that rear wheel is spinning, so are the cranks, which means you have to pedal whenever your bike is in motion.

Fixies don’t coast, and though they can be customized to allow freewheeling, many riders choose to leave them unmodified for the exercise.

Being forced to pedal, even when you’re rolling downhill, tests your endurance. It also teaches your body the perfect cadence for your bike, all while strengthening your legs, thighs, and glutes.

And, a fixie is the ideal bike to ride for a cardio workout. It doesn’t let you slack off on the pace.

If you want to reach your destination, you can’t cruise along on momentum — you have to work for it. This style of bike requires the rider to become fit to get the most out of it.

For many people, having 30 or more gears on a bike is both intimidating and confusing. Not everyone wants the hassle of trying to remember which gear is best for which situation, or the distraction of fiddling with controls during a ride.

If you are such a rider, the fixie’s simplicity will suit you well. When you hop into the saddle, you always know what to expect. There are no dials to adjust, or finicky parts to consider.

Many fixed-gear models don’t even have brakes! You reverse pedal rotation to stop instead. It can take some getting used to, but it’s an intuitive system.

And, with so many components absent, these bikes are in the featherweight category. They are very easy to steer and maneuver during a ride, and it’s little trouble to lift them into a bike rack, or carry them up a few steps.

Another benefit of the fixie’s stripped down design is reduced maintenance. Take away the more complicated mechanisms, and a bike has far fewer failure points to worry about.

There are no shifters or brake handles that can malfunction, and the trailing cables that can be such a pain to repair and replace are also absent.

The chain isn’t constantly being swapped between rings and sprockets or running through a derailleur. It ensures less wear and is less likely to ever snag or drop out of place.

You don’t have to replace brake pads, or service discs or calipers. Your rims aren’t subjected to the clamp of rim brakes, and there is no hydraulic fork suspension that can fail and ruin your ride.

With a fixie, you have only the basics to tend to, and even they are easier. When you have to change your rear tire, it’s a simple task to slip the chain off and get the job done yourself.

This isn’t just convenient, it saves money as well.

There’s something to be said about the style of these bikes. When other cyclists see you on a fixie, they know that you’ve mastered a style of riding that can be demanding, and tricky to get the hang of.

There’s a certain understated swagger inherent in this, and it garners respect. And, the fixed gear bike is enjoying a boom in popularity.

Its clean styling fits into the simple, chill aesthetic of the hipster culture. It also appeals to the environmentalist crowd, even more than the average bike, because of its focus on minimalist construction.

Considering that fixies are innately less expensive, spending a lot on a high-end version makes a statement. There’s a sense that you are more interested in craftsmanship, and that the bike is a piece of art.

For a bike that has the least parts, the fixie seems to communicate more than any other through its unique style.

How to Ride a Fixie Downhill?

If you’re interested in experiencing the higher speeds mentioned earlier, you’ll want to try riding downhill on your fixie. However, it’s important that you know how to do this safely.

To begin with, make sure your gear ratio is appropriate for hills. A 48/18 ratio is good for both up and downhill riding, and decent for level paths.

Remember, the pedals spin with the rear wheel. Go down a hill too fast, and this spinning can quickly overwhelm your ability to keep up.

You can lose control of the bike, and seriously injure yourself, if you aren’t careful.

Before attempting any significant hills, fully familiarize yourself with riding the bike. Especially practice braking with the pedals, if you don’t have a front wheel brake installed.

Once you’re comfortable that you can control your bike, you can take the hill. As you descend, pay attention to how in control you feel. Make continuous speed adjustments with your brakes, to maintain a manageable cadence, and you should be fine.

Road bikes have an edge where most riders are concerned. Their selection of gears make it possible for a bike to meet the rider at their level of experience, and to adapt to the difficulty of the terrain.

Their heavier weight means they won’t get up to speed as quickly as a fixie. However, once they do, it’s easier for them to maintain it as elevations and conditions change.

This is what gives them their higher average speed.

But, the lighter, uncomplicated fixie shows off under the right conditions. It has the potential to be the faster of the two when the way is level, and the gear ratio is optimized.

And, there is one final variable: you, the rider. All bikes can be pushed to greater feats by the power of our exertion. But, the fixed-gear bike relies on us more than any other to unlock its true potential.

2 thoughts on “Fixie vs Road Bike: Are Fixies Faster Than Road Bikes?”