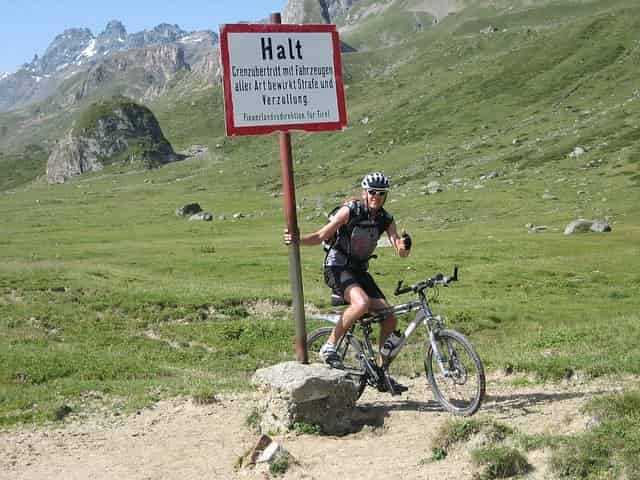 By Emily DurantPosted on August 17, 2022Posted in CyclingTagged Beginers InfoNo Comments on 7 Ways Friction is Harmful When Riding Bike

Friction is harmful and beneficial at the same time when it comes to riding a bicycle. It helps maintain the necessary tire grip, helps with brake and don’t let you fall when cornering. But that does not mean its always acts in your favor and thus is the main culprit for lack of speed and wearing of gears.

You may already know one or two major ways friction is bad for a cyclist for example effects of friction on bicycle tires, its effect on your speed and role of air resistance.

In this article we will learn seven ways how friction is harmful when biking; so you can know which friction you should try to minimize and which ones’ to not.

But before we began let’s brush up some concepts on friction. Believe me, I am not a fan of physics either but sometimes it’s better to explain things in a more scientific way.

How Does Friction Work in a Moving Bicycle?

Friction is the force that occurs when two surfaces collide or rub against each other. Friction is always a slowing force as it moves in the opposite direction to the object that is being propelled.

Moving any object against another object causes friction.

When it comes to bicycle friction there are four different types, namely rolling, drivetrain, wheel bearings and aerodynamic. Let’s take a look at what each one does and how they’re made.

Aerodynamic force on a moving bike mostly consists of two elements- the air and the body. The rate is exponential in that it gets higher when the body moves at a faster pace.

To conserve energy, most cyclists will position themselves behind another who’s leading.

It’s worth noting that two cyclists that are riding side by side do not make for a faster speed- the one at the front will have to exert more because of increased drag.

This is because the air vortex will get disrupted, and the front cyclist will have to deal with greater friction.

Otherwise known as tire drag, rolling is a linear type of friction, which means it increases the faster you go. The elements involved are the wheel’s surface and the road.

Thicker or thinner tires do not necessarily mean they produce lesser rubbing. If you want less rolling resistance then you should increase the tire pressure to go faster on a perfect road.

This talks about the bearings in the crank and pedals, as well as the chain’s tension. The pulley wheels generate a good amount depending on how taut the chains are, but it’s worth noting that the conflicting force is not generated by the bicycle’s main gears.

The only time lubricating a chain benefits a cyclist is when they’re using gear shifts.

Wheel bearings also present a linear friction aspect in the said area. As mentioned, the faster you pedal the more opposing force is generated, but they’re mostly produced in equal amounts.

7 Ways How Friction is Harmful When Riding Bike

Friction can cause pedaling to be harder depending on the surface you are traveling on. For example, if you are riding your bicycle over harsh uneven surfaces you will find it much harder to pedal than if you were traveling over smooth, even surfaces.

The same is true of cycling up hills. Of course, pedaling will be much harder, so you will need to be fitter if this is likely to be part of your regular cycling routine.

The terrain you cycle will not only impact your bike, but it will also take its toll on your body as well, so you will need to ensure a certain level of fitness.

The weather can also play a part in your biking experience. If there is a lot of wind against you then you will need to pedal harder against it. That means you will be at a disadvantage of two systems of friction as the wind will slow you down as will the terrain you are cycling on.

Have no doubt on this one, friction not only occurs in terms of your terrain, your bicycle and your pedaling style, but air resistance around you can cause friction too.

The faster your bicycle moves, the more air resistance you will find. You can reduce the air resistance by changing your position on the bike and crouching down to streamline the air flow movement.

This can help minimize the harmful effects of friction on your bicycle and yourself as you will be able to travel further with the same amount of effort.

3. It Make You Invest On Repair’s Just To Keep it Operational

One of the ways friction is bad for your bike is by making it compulsory to repair your bike in interval just to keep it operational. The friction cause the gears and accessories to wear and fail.

Thus It is essential to keep your bike in good repair in order to minimize the harmful effects of friction on it.

That means ensuring all wheel bearings, cog bearings, and chain wheels are well oiled regularly because if they grate against each other due to a lack of lubricant when you pedal, friction is harmful to them and you may need to replace or repair them.

This will also put pressure on your muscles when pedaling. By ensuring you look after your bike you will not only extend its life but ensure you stay in the peak of health as well.

4. Effects of Friction On Bicycle Tires

OF course, it is not only your bike’s mechanical workings that can be affected by friction: the all-important tires need attention too! Your tires should be optimally inflated as underinflated tires will cause the rest of the bike to work against itself as well.

It is important you use the correct tires for the bicycle you have. Therefore, if you use a mountain bike your tires will be “knobbly” so they can trap dirt and grip off-road terrain better.

But they would not be very good on the road. For road bikes you will need smooth tires to get the best friction. The wrong tires on your bicycle will not only negatively affect your riding experience but they may also shorten the life of your tires.

The wrong tires or tires inflated to the wrong pressure can make pedaling a lot harder than it needs to be. Get this right and you will considerably minimize the negative effects of friction on your cycle experience.

5. When You Want To Make Your Bike Faster It Keeps Pulling Backwards

For some, being a cyclist is all about speed. Be it they want to be the fastest cyclist around town, or they just like the feeling of the wind in their face.

If you choose to cycle at speed, then you will know that it takes a lot more energy to go uphill than it does to coast downhill. This not only puts pressure on your bike but also on your own body, particularly the knees.

In fact, because friction becomes exponentially larger the faster you go, it takes twice as much effort to achieve half as much speed. That is why experts ask to reduce the friction of your bike components.

Tires with low pressure create more rolling resistance, which cuts back on speed. Upgrading your wheel with a more aerodynamic design can give you an extra jump in terms of speed.

Making sure your tire pressure is correct is the simplest step to ensuring your bike is fast. It’s also one of the easiest and cheapest, as all you really need is a pressure gauge and an air pump.

If you use an electric bike you will have different cycling issues. Some bikes are all electrical, whilst others are pedal-assisted. Most cyclists that use electric bikes take advantage of the battery power when going uphill or when their legs become tired, as this can help prolong a cycling journey.

A cycle battery will not last forever and it also needs looking after with the same care and dedication you give to your cycle. This is where the effects of friction kick in.

Friction can be harmful to the battery life if going uphill a lot of the time or for prolonged journeys as the continual push against the force of the gradient means the battery will wear out quicker than if it was only used on smooth and even terrain. Then there is the negative effects on the motor winding.

Which heats up and wear down over time as the motor has to work overtime to work against the force of friction. That is also the reason why there is a limit on the weight an e-bike can carry.

You should ensure the battery is well charged ahead of your journey and do not charge it in small bursts or when you have just completed a journey as this will also affect its shelf life.

Whilst friction will affect your cycle parts and your legs, your muscles, and your breathing to some extent, it will also affect your backside or rear end.

This may be an area that you have not thought about, but friction between your rear end and the seat on your bicycle can have a negative effect, not only causing pain, inflammation, and muscle spasm but other issues as well, such as sores.

If you do not pay attention to this, you may be off the road after just one bike ride! Medical Practitioners often have to treat the effects of friction on the rear end of an over-enthusiastic cyclist.

By ensuring you have the right seat on your bicycle you will reduce the harmful effects of friction and ensure you can spend many happy hours on the road.

What’s The Average Bike Speed For New And Experienced Cyclists?