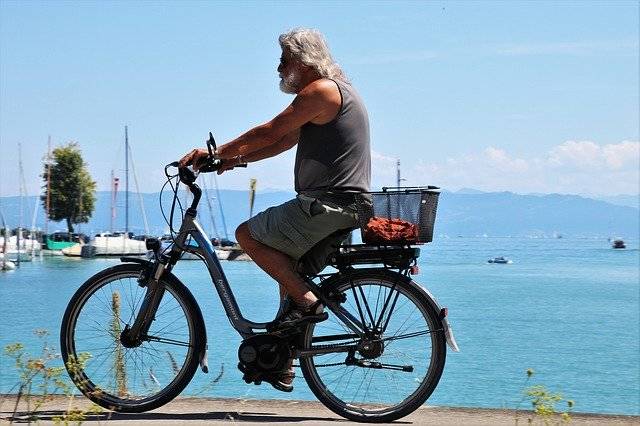 By sonumonuPosted on August 11, 2022Posted in CyclingTagged Beginers Info, Electric BikeNo Comments on E-Bike Weight Limit? Net Weight And How Much Can They Carry

This weight limit or load carrying capacity includes the weight of the cargo and the rider.

Electric bikes have become an increasing trend way to commute around town. They can easily reach speeds of 18 miles an hour ( with some going as much as 30 mph ), are safe for the environment when compared to a car, and give yourself a work-out while riding them.

But since these are still bikes, you may wonder what the weight limit is for an electric bike. Especially when they came in a variety of sizes and motor power like the 250, 350, 500, and 750W.

The bike weight limit, as you can imagine, is how much weight a bike can handle before it’s at risk of having the frame snap or the tires blowing out.

Given that an electric bike uses a motor, will it be able to carry a greater load? Or is the limit the same? This is what we’ll cover today, but first, let’s give you a quick rundown on an electric bike.

What Is An Electric Bike?

Let’s give a recap of what an electric bike is. Quite simply, it’s the frame of a bicycle married to an electric motor. The motor is normally powered by a lithium-ion battery and is rechargeable.

The motor tends to work either in assisting you with your peddling or working like a moped that you can also start to peddle if the need arises.

There are so many reasons why it is the best way to get around for short and medium distances. It is easy to maintain/use, a great source of workout ( peddle assist ), save fuel cost, is versatile, and does not emit pollution. So there is nothing stopping switching to an electric bike.

Because of the small battery, the range may not be that good depending on what you’re looking for, but that’ll be for another article. Let’s now focus on the topic at hand!

What Is The Weight Limit For An Electric Bike?

For an average electric bike, the weight limit is 300 pounds, or 140 kg. There are differences, which we’ll cover, but 300 is the net weight. Some can carry more, and some can carry less.

So if you’re worried about your weight, don’t be! An electric bike can carry you without any sort of issue. But if you want to carry luggage, that may be a different story.

But for now, let’s just assume you’re not carrying anything heavy and you’ll be the only weight on the bike. How does an electric bike compare to a regular bike?

A regular bike typically has a weight limit of 300 pounds, or 140 kg, making it exactly like an electric bike. Again, there are differences, but on average they can both carry the same.

You would think an electric bike would be able to carry more, or possibly less because of the motor, but surprisingly they’re on the same level in terms of weight.

An electric bike uses the frame of a regular bicycle, just with a motor attached. Making it not that much different. So if you’re switching to an electric bike and are worried that it wouldn’t support you, don’t worry! You’ll have no trouble adjusting to your new electric bike.

Today electric bikes come in a wide variety of sizes, weight, and types. Although they don’t look much different than a standard bike they cost a lot; at least for that college student for which bicycle is the primary mode of transportation. So are electric bike worth the investment? Read more in this post.

So what is the e-bike weight limit? How much weight can an electric bike carry? Are electric bikes heavy? I have personally collected this information for the top 10 most popular electric bikes available in the market.

To make it easy to choose the right one for yourself. I have ranked them based on their weight and load capacity. While also including the bike type and link to Amazon where you can buy them.

What Does Maximum Weight Limit Mean For Me?

The maximum load capacity or e-bike weight limit includes the weight of the bike, any luggage you carry with the weight of the rider. It is the maximum weight capacity to which the bike frame can support load. In practice these are conservatively rated by the manufacturer allowing for an extra 20% safety allowance.

E-bike weight limit is different than the load capacity as it also includes the weight of the bike frame. For example ANCHEER 500 Electric Bike with 330 lbs load capacity and 50 lbs self weight.

Initially a 250 lbs weight limit may sound satisfactory but when you do the math it feels short. For example 250 lbs is equivalent to 113 kg and subtracting weight of bike ( 22 kg ); we get 91 kg maximum riders weight.

When it comes to electric bikes this weight limit becomes even more important. As the motor current and battery capacity is linked to the weight limit of the bike.

The total weight of the bike with its riders affects the current drawn by the motor. Generally the lighter the weight the better will be the performance of the motor and longer battery life.

Further when you add load the current drawn will increase and after the weight limit it becomes too high it causes heating and motor failure. Then there are other safety issues and issues of control and balance.

How To Choose A Bike With A Weight Limit That Matches You?

Now, let’s talk about those differences we mentioned earlier. The net average weight limit for an electric bike is 300 pounds, that is 140 kg, but this is the average. Depending on what you want your bike to do, and even the brand, the weights can be drastically different.

Commuter Electric Bikes: These are the most common bikes you’ll find on the market, designed to get their riders from point A to point B while also providing a smooth ride.

Because these bikes are expected to carry a passenger and cargo, like a briefcase or book bag, they will have a higher weight limit. 250 to 300 pounds, or 115 to 140 kg, is the typical weight limit for commuter bikes. Some commuter bikes, especially larger ones that have more seats, can surpass that weight limit.

Sports Electric Bikes: Bikes designed for sports in mind, like mountain bikes or racing bikes, need to be smaller and faster. Normally these bikes will only carry up to 250 pounds, 115 kg, of weight. Perfect for riders who are trying to be as light as possible.

Foldable Electric Bike: These bikes are a mix of electric and sports, in that they need to provide a smooth ride from point A to point B, while also being fast and light.

These bikes are very popular, and common, with those living in cities where space is a premium and so need a convenient way to house their bikes after they’re done riding.

By folding it up, and possibly even hanging the bike on a wall, foldable electric bikes take up less space, but can’t carry as much either. Just the rider and some lighter cargo, making their weight limit around 220 pounds, 110 kg, or lighter.

Specialty Electric Bikes: Some bikes are designed for families, or even for hauling small amounts of cargo. These bikes will typically have weight limits exceeding 500 pounds or 227 kg and might have a bulkier frame or possibly longer frame to support this weight.

So Which One Just Right For You?

And that’s the basics on what each bike can carry. Again, since electric bikes use regular bike frames, there differences in weight compared to a regular bike is negligible.

As is choosing which bike is for you. If you live in a crowded city where cars and buses can get stuck in a deadlock, you’ll want a commuter bike and not a sports bike; even if the sports bike does look cooler.

The same is true for an electric bike. You pick them based on what you need. A commuter bike isn’t going to help you in the mountains, and a bike made for mountain climbing is going to go to waste in the city streets.

That being said, the weight limit tends to be negligible as well. Even with a commuter bike, in what situations do you feel that you’ll be carrying over one hundred extra pounds or kg or things?

All said and done, the net weight limit for a electric bike is around the same for a regular bike, baring specialty differences. If one of your main fears of an electric bike was that they can’t carry as much as a normal bike, then your fears are unfounded.

You can easily make the switch and not worry about damaging your new bike. So, why not go check out some E-bikes near you today and see if you’re ready to make the switch!

In a nutshell, knowing your e-bike weight limit is crucial as it probably helps you pick the most cost-effective, energy efficient and time saving solution for your personal needs.

As long as you are within the limits your motor will continue to performs like the new for ages. Exceeding the weight limit on other hand negatively affects the riding experience and overall safety.

While weight is a good thing on mountain terrain as it helps gives you better control. Too much of it is certainly not a good thing as you always has to account for the bike weight in their weight limit.

The weight limit of electric bikes lies anywhere in between 300 to 400 lbs with the average load capacity of 300 lbs. While folding bikes in general are designed to carry lesser weight.

How Much Does a Bike Weigh? The Importance of Bicycle Weight

Do Bicycles Have a Weight Limit? And How Much It Can Hold