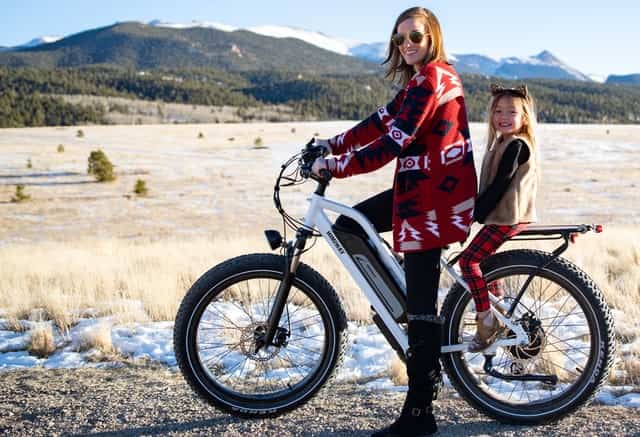 By sonumonuPosted on June 26, 2022Posted in CyclingNo Comments on Should I Buy an Electric Bicycle? Are Electric Bike Worth It

Electric bikes are becoming increasingly popular. They’re often seen as a way for people to commute without using fossil fuels, but are they really that much better than traditional bikes?

Some people are skeptical about whether or not they will invest in an electric bike which is quite understandable.

If you have an existing car or if there are multiple bicycles stored in your garage, then getting an electric bicycle ( E-bikes ) can be far-fetched.

The fact is, an electric bike is a worthy investment, especially if you calculate the amount of time, effort, and money that you have to spend on gas just by running your daily errands.

Instead of throwing money on petrol or sweating on traditional bikes when it’s not necessary, you can get yourself an electric bike and save time, effort, and money on a daily basis.

Should You Buy an Electric Bicycle? Are They Worth It!

What Are Electric Bikes And How Do They Work?

An electric bike or commonly called an e-bike is just like your traditional bicycle, only better.

It is equipped with an electric motor, battery, and controller that can either assist you while pedaling or propel you on its own, depending on your chosen e-bike’s classification and specification.

The features and technology added to this upgraded bicycle are attached so seamlessly that it still looks traditional, nonetheless.

The method of operation of an e-bike will depend on the system that it was built. There are two different e-bike systems that are highly popular in the market today, namely, a pedal-assist and a throttle.

When using pedal-assist, the system will operate only when you pedal.

The throttle, however, is the system that will operate simply by steering or pressing a button on your handlebar which does not necessarily require pedaling.

Compared to a pedal-assist, a throttle e-bike can drain your battery a lot quicker since it will require more electricity. If you prefer both systems, then you can choose an e-bike that features both the pedal-assist and the throttle system that you can use simultaneously.

The Pros & Cons of Electric Bikes

There are plenty of benefits to electric bikes, such as being able to go further with less effort, saving money by not having to pay for gas, and reducing pollution.

However, there are also some drawbacks, such as the fact that they aren’t as light as normal bikes, requires charging and they can be expensive.

Here are the pros and cons of electric bikes that you can consider before making that final decision whether to own an e-bike or skip the innovation entirely.

Whether you live in an urban or suburban environment, riding an electronic bike will always be the best transportation option for you. For those living in the suburban area, an e-bike will allow the convenience of traveling long distances with just a little effort or difficulty.

If you’re living in an urban area, the innovation will provide the convenience of traveling to and from work or school while running errands in between and with absolute ease.

Many high range electric bikes have this ability to switch between full power, pedal assist and no power modes. So you can use as you best prefer with maximum, comparatively low or least effort.

With an electric bike, you can dramatically cut your petrol or gas expenses since it can only run using electricity. Charging an electric bike is way cheaper than paying for fuel to power your motor or car engine.

Now since a typical e-bike battery last for 20 to 80 miles per charge and an average American need to commute roughly 39 miles per day; thus the total cost of charging your e-bike will be about $10.56 per year.

Since electronic bikes solely rely on electricity for power, you can then support our environment by lowering your own carbon footprint. Every time you opt for an electric bike as a mode of transport is a big leap that will allow our planet to heal one ride at a time.

An electric bike is just almost the same as your regular bicycle, you can ride along bike lanes and sidewalks which means that this mode of transport is a lot safer compared to cars or motorbikes.

Just like a traditional bike, the e-bike also promotes exercise and good health through pedaling. With an e-bike, you can exercise at your own pace since you can turn the pedal assist on or off depending on your training target.

Promotes Mental Health; Whenever you feel stressed or have mental fatigue, you can quickly grab your e-bike and pedal away all the negativities and stressors of life.

Heavier Compared to a Traditional Bicycle

Electric bikes have motors and batteries which makes them heavier compared to traditional bikes. However, electric bikes are much lighter than automobiles.

In fact, the average weight of an electric bicycle is about 50 pounds.

In gas-powered vehicles, you only need to add fuel for them to run which only requires going to a petrol station for that quick gas pump.

However, when it comes to electric bikes, you will need to plan every time because the e-bike needs to be charged for you to enjoy its full function.

Which Type Should You Buy?

If you’re looking for something that’s easy to use, then you should consider buying an ebike. These bikes are designed to make riding easier, so you’ll find them much easier to ride than traditional bikes.

They’re also cheaper than other types of bike, making them a good choice for people who need to save money.The specific type of electric bike that you should purchase will depend upon your usage and preference.

Multiple types of e-bikes are available for different types of bikers and choosing the right one for you is quite easy.

Whether you need an e-bike to simply take you around the city or an e-bike that you can take with you on one of your adventures, here are the different types of electric bikes that you can consider.

If you’re just looking for an e-bike that you can use around the city, then an electric city bike is the one that is just perfect for you.

These bikes are commonly equipped with 250-watt motors which can allow around 15 miles of travel or roughly around 40 minutes depending on your usage.

Most electric city bikes are also designed as cargo bikes that allow you to carry groceries or other items for your convenience.

If you need an electric bike that will allow you to cover a lot of ground on a single charge, then an electric mountain bike is your best bet.

This powerful e-bike is equipped with a battery that’s higher in capacity compared to electric city bikes. It means traveling long distances and on difficult terrains can always be your idea of a fun weekend.

The possibilities are endless if you have a reliable electric folding bike whenever you need one. It is a light and portable bike that you can ride at work or take with you on one of your travels.

Also, this will allow you to skip the daily struggle of getting a bike rack space since they can be folded.

Where Can You Charge Them?

Most electric bikes come with a battery that will last between 20 and 50 miles. That means you can charge them up at home, work, or anywhere else where there’s access to electricity.

Nowadays you can charge your electric bike anywhere for continuous function.

You can simply charge it by removing its battery, plugging it directly into the port, or adding a solar panel system that can ensure unlimited power to your e-bike.

It is very common for bikers to simply charge their e-bikes at home prior to travel.

If you think about it, it is more convenient than a gas-powered vehicle which requires you to travel and search for a petrol station all the time.

On top of that, you can also power your e-bike by installing a solar panel which will allow you to travel at zero cost.

How Much Do They Cost?

An electric bike is a lot cheaper compared to a gas-powered vehicle but it is of course more expensive when compared to a traditional bicycle. Here are the different price ranges that you can look at when you’re considering purchasing an e-bike.

If you want to get an electric bike that’s within the range of $500 – $1000, then there are many good electric city bikes that fall under this category.

If your budget falls within the price range of $1000 – $3000, then finding a durable electric bike will be an easy feat for you.

There are multiple trusted brands that sell electric bikes under this price range which means that purchasing spare parts in the future will be very easy.

If electric mountain bikes are the ones you need, then the $3000 – $6000 is the price range that will allow you to choose a high-performance bike that will bring all your adventures to a whole new level.

Final Verdict: Are Electric Bikes Worth It?

The use of electric bikes can easily provide us with an affordable and convenient mode of transport that will automatically increase our quality of life.

Whether you’re living in the city or suburban area, an e-bike is an absolute necessity for everyone of all ages, genders, and social statuses. E-bike is the future that will gradually change the world, one pedal or ride at a time.

So ask yourself whether you want something to save money? Do you want a vehicle that supports your active lifestyle? Something that is good for commuting? Do you need something for exercise?

If your answers to most of the question is “YES” investing in electric bikes is worth for you.

So keep riding, explore more and lead this revolution against fossil fuels.

E-cycling Just Another Sport Or Is It A Lifestyle