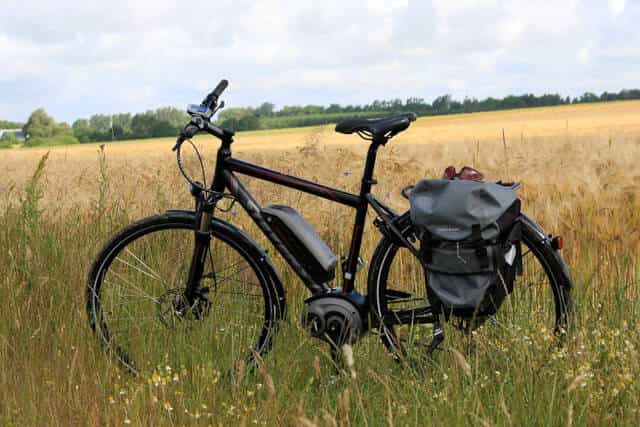 By sonumonuPosted on Posted in CyclingTagged Beginers Info, Electric BikeNo Comments on Can Electric Bikes Recharge As You Pedal?

With the rising price of gas nowadays, it is not surprising that more and more people are switching to non-gasoline vehicles like electric bikes.

Electric bikes or simply E-Bikes are a type of bicycle that uses electricity and pedaling to run. They allow users to cycle with lesser effort making daily commutes much easier and more convenient.

Even with all that many new e-bike owners have concern about their overall mileage / range. Sometimes so-much so they will look into ways to extend range ( ex: adding solar panels ) or search for e-bikes with regenerative braking.

First of all, you need to understand that it is a false notion that all electric bikes get recharged while you are peddling. Even for e-bike models that comes with regenerative braking ( a recharging feature that sends back some power back to the battery while you are breaking the bike ); you can only extend your range by 4-6 miles.

In addition to this, you should note that such bikes that offer regeneration features are relatively harder to pedal owing to the complicated motor design.

In electric bike models with regenerative braking systems battery range extension up to 5-10%. Generally, these systems are more commonly found in electric cars (and less in electric bicycles).

Not All Electric Bikes Can Recharge While Pedaling

Most e-bikes batteries can’t be charged by pedaling. Pedals and batteries have different functions in a bicycle.

Through the pedals, the rider can give the bicycle power to run while the battery gives the rider and bicycle a tailwind to speed up easier.

Hence, even if you pedal your electric bike, you will not likely charge your battery. Additionally, most e-bikes use lithium battery packs that require a power outlet to charge.

So, if you want to recharge your electric bike’s battery by pedaling, you should first ask your retailer or supplier about this feature. Furthermore, you may consider opting for a bike with a higher power rating so your battery power can last longer and won’t need to charge frequently.

What Is Regenerative Braking for Ebikes?

Regenerative braking involves harnessing kinetic energy. The kinetic energy is then converted into electric energy, and then it is fed into the main traction battery.

Basically when you apply brakes in an electric bike with direct drive hub motor some of this energy ( about 5 to 10 % ) is captured and fed back into the battery.

However, you will find significantly fewer e-bikes in the market that use active regenerative braking.

Some e-bikes also allow the riders to charge by just peddling the e-bike in the backward direction. Also in several bikes, whenever you use the brake, the brake sensor is triggered to kick into reverse mode.

In this manner, the energy of the forward motion of the e-bike is utilized in charging its battery, this process is termed regenerative braking.

However, the problem with regenerative braking systems is it returns less power. On an average, it will take around 10 Kms of pedaling in order to give 1 Km charge (this justifies why charging by pedaling is not efficient.

We advise all riders to fully charge the bike’s battery once every few weeks so as to balance the cells.

Effectiveness of Regenerative Braking in E-Bikes

This energy is later converted to electrical power and charges your vehicle’s battery.

Although this system seems to be an ideal feature for e-bikes, the regenerative braking system may not be as effective on e-bikes compared to other vehicles.

E-bikes do not produce enough kinetic energy needed to make regenerative braking effective. Compared to cars, bicycles are smaller in size and slower in velocity.

An efficiency of 70% indicates that during the braking process, 70% of the total kinetic energy can be converted into acceleration later.

However, it’s worth mentioning here that the efficiency of regenerative braking systems in e-bikes differs for different batteries, vehicles, controllers, etc.

The more you use the brakes, the faster the battery will recharge

Above, we already discussed that regenerative braking may not be effective on e-bikes, but what if you brake more? Will it charge the battery faster? The short answer is yes.

Frequent braking may contribute to faster recharging because the kinetic energy is produced whenever you brake. However, frequent braking or using the brakes often can’t recharge the battery fully.

Because of the low kinetic energy produced by e-bikes, the regenerative energy braking system will also have low energy to convert to electrical energy.

With just 5-20% efficiency for regenerative braking you need to brake at least 40 to 50 times while riding your E-bike on a 25-mile trail to charge about 5% of your battery.

If you are riding your E-bike on difficult trails like rough roads or hillsides, you may easily brake 40 times as you cycle. However, if you are riding on a flat street, you may want to save some money and opt for an E-bike without a regenerative braking system.

Why is the Regenerative Braking System So Rare?

In addition to this, there is no justifiable use-case for this braking system.

Also, regenerative brakes are considered impracticable for e-bikes (this can be attributed to the fact that the most practical drive variant for e-bikes is mid-drive.

On the other hand, regenerative braking is more practically applicable in electric cars. So, overall, it’s not worthwhile to use such a braking system that offers minimal efficiency.

What Happens When E-bikes Battery Dies?

E-bikes do not mainly depend on batteries to run. When an E-bike’s battery dies, you can still use it to commute by pedaling. The pedals of the E-bike work like the pedals in regular bikes.

As you push the pedals, the necessary gears to move the bike turn causing the bike to propel forward.

So, even if you are in the middle of the road and your E-bike’s battery dies, you won’t have to worry about getting stuck in traffic because you can easily run it by pedaling.

However, pedaling an E-bike requires more effort compared to regular bikes due to their build. If you have weak bones or pre-existing bone conditions, you may experience difficulty pedaling this bike.

When you arrive at your destination, you can charge the battery of your E-bike. Depending on the power rating or your battery and power source, your E-bike can take 4 to 6 hours to charge completely.

If an e-bike rider does not want to face such a situation, it’s always advisable to keep an eye on the battery charge of the e-bike on display.

Just when you start to notice that you are using up the charge too fast, you should shift to a low pedal assist (this will help you save your e-bike battery).

Do Electric Bikes RECHARGE While Pedaling or Braking?

Although electric bike’s fall under the same category, their features and mechanisms can vary significantly.

Hence, while some may be able to regain lost battery charge while pedaling or braking, not all electric bikes can power up through this.

The majority of the electric bikes in the market at the time of this writing can’t be recharged by pedaling. The pedaling power in the bike only helps in propelling the bike forward faster.

The pedals and batteries work separately in an E-bike. Pedals allow you to operate and run the bicycle while the battery gives you a tailwind that makes cycling more efficient. Additionally, most E-bikes are built with lithium-ion battery packs that require charging on a power source.

Some modern E-bikes come with a regenerative braking system that allows them to recharge while braking.

Although this technology sounds very promising, this system may not be well-suited for all E-Bikes. A regenerative braking system works by capturing and converting kinetic energy to electrical power.

Unlike bigger vehicles, E-bikes can only generate low kinetic energy because of their low weight and velocity.

So, even if your electric bike can regain charge by braking, you are not likely to get a full charge. Moreover, e-bikes that can recharge while braking is rare and may cost a lot higher compared to other E-bikes.

E-Bikes That Have Regenerative Braking

Vello Bike+ is a highly innovative self-charging bike. If you were searching for a lightweight e-bike that charges itself, then Vello bike+ (the world’s first self-charging foldable e-bike) will be the best choice for you.

Unlike the other foldable e-bikes, Vello bike+ is relatively light in weight so that you can enjoy a smooth ride. Note that the titanium model of Vello bike+ is 24 pounds.

Vello bike+ features a patented magnetic release, making it easier to fold the bike. Overall, the design of this electric bike is quite user-friendly.

The design is a great innovative product, but it is quite visually appealing. During braking itself, the lithium-ion battery of this bike gets fully recharged.

Thus, it can be said that this bike delivers excellent performance, especially the self-charging feature is what makes this bike a top choice for advanced riders.

2. Rayvolt X One Self Charging Ebike

Rayvolt is one of the most notable new generation electric bikes ever. If you love riding in mountainous regions, this self-charging e-bike will be ideal for you.

The exterior looks of this bike are quite impressive. The most exciting and useful feature of this bike is the self-charging feature. Rayvolt X One features a portable battery.

The backpedal regenerative braking helps recharge the e-bike’s battery by rolling the pedals in reverse. This electric bike is available in three color options. For fully charging the built-in battery, you will require four hours. This bike’s sleep design makes it appealing to all bike riders.

Nua Electrica is such a lightweight electric bike (it weighs just 13 kg). No doubt riding this bike is like a breeze. Nua Electrica is a well known Barcelona-based bike manufacturer. It operates quietly, also note that this is the lightest single-speed bike ever.

This e-bike features a handlebar, seat post, fork made up of high-quality fatigue-resistant titanium. You can use Nua Electrica in various modes using an interesting app called the Zehus app.

This bike can be operated in six different cycling modes; the most fantastic model which most riders love is the “self-charging mode.” As said earlier, there are relatively fewer charging stations available for e-bikes.

However, Nua electrica solves this issue of charging for you. This bike continuously charges itself to experience complete freedom while cycling.

This electric bike will never fail to impress you, even on extreme terrains. Besides, this bike comes with Gates carbon belt drive, a cutting-edge technology.

So, we hope that we could clear many of your misconceptions, doubts, or queries related to e-bikes. Of-course, you now know very well that e-bikes make it easier to ride.

As mentioned earlier, if you love riding on hills or steep terrains, make note that e-bikes are appropriate for hilly regions. For electric bikes that come with motors rated at 2.5 kW or higher, a license will be needed.

Overall, whether rainy or sunny, water-resistant electric bikes are an excellent choice for riding in various conditions. If you have any doubts or suggestions related to this article, then please feel free to write it down in the comment section. Stay Tuned

How Much Does It Cost To Charge An Electric Bike

Critical Tips on How to Remove Speed Limiter E-Bike

Are E-Bikes Dangerous? 6 E-Bikes Risks To Know And Avoid