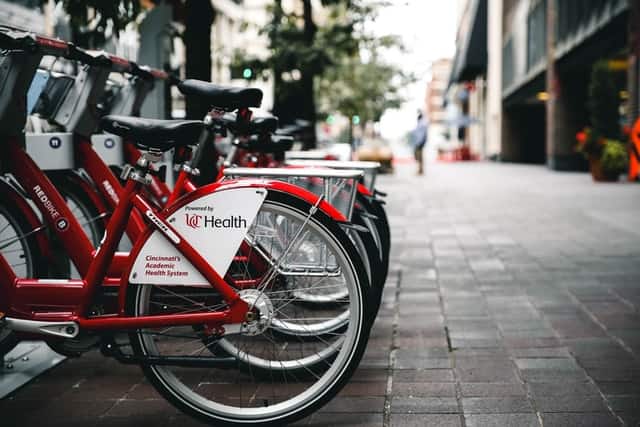 By sonumonuPosted on Posted in CyclingTagged Beginers Info, Bike GuideNo Comments on How Many Bicycles Are In The World? Bike Facts & Statistics

2020 was the year of renaissance for cycling industry with demand two to three times higher than supply worldwide. This sudden urge to stay fit then add on to already growing trend to shift to bikes.

Ever since 1965 when the production of bicycles surpass that of cars; the demand for more, better bicycles has remained stable in the society.

In 1969 the total production of cars and bikes ( worldwide ) was nearly same at 25 million unit, but as of 2007 the total bike output has climbed to over 130 million unit per year compared with 52 million cars.

After including the great bicycle boom of 2020; the global market for bicycles is estimated to grow to $147 billion by 2027 with china being the largest producer.

How Many Bicycles Are In The World

Nobody knows for sure exactly how many bicycles are there in the world, but is estimated to be over 1 billion. A large part of which ( about 50% ) rest in countries like china and India.

In 1992 the total number of bicycles in china was around 450,000,000 units; but since 1995 China’s bike fleet have declined by 35 percent. At the same time sales of privately owned cars almost doubled.

I think it is lower because more and more chinese are using electric scooters / regular motor-bike than bicycles. Back in 2017, fewer than 12 percent of Chinese commuters rode bicycles ( which Chinese communist part wants to increase back to 18% by 2022 ).

Further as of 2016 there is about 72.38 million bicycles registered in Japan.

China and India together also exhibit a flat trend in bike ownership after a sharp decline in the 90’s. Bike ownership levels in African countries have gone up from 18% to 26% from 1990 to 2012.

The mean bike ownership in South America is 52% while of Southeast Asia remains at 49%. On the other hand Philippines stands out with a low 23% mean ownership level.

How Big Is The Bicycle Market?

The continue shift towards environmental concern, recreational sports and health awareness towards overall well-being is expected to boost number of people opting for bicycling.

Today more people are opting for bikes not as a means of transportation but as a convenient form of exercise. While some as recreational sports like mountain biking and other’s for leisure ride.

Cycling events, such as Tour de France, bike to work days, Vuelta a España and Boulder Roubaix Road Race adds to its popularity.

The rise in disposable income, growing health concern, demand for electric bikes, preference for bicycles over cars and growing trend of bike packing are a few major factors driving the growth of bicycle market.

The second most sold bike type worldwide is hybrid bike used for leisure rides and commuting. While electric bikes is the fastest growing segment among all bike types.

The road segment among bicycles holds such large part of the market share due to large number of commuters who prefer to use road or hybrid bike for short commute.

People also prefer road bike for its sports culture, ease of use and speed ( some prefer drop over handlebars ).

The global bicycle market counted about 165 million units produced in 2020 after the recent peak in cycling demand in 2019. Both road and electric bikes combined accounts for 45% of worldwide share.

In 2020 Asia pacific emerge as the dominant market at $22.83 billion with revenue share exceeding 33 percent. The Asian market appears on top because of the significant demand for urban bikes.

At the global level the global pandemic created a cycling and fitness boom like never seen before. According to the strava sports data report 11.2% of its customer tried cycling for the first time in 2020.

There is a growing trend of customizing road bikes towards specific purpose. More people than before are adding pannier, recreational saddles and racks to their road bike for tour and commute.

The E-bikes have grown the fastest in last decade specially in Europe and North America supported by significant improvements in the motors’ performance and bike design.

More Women Are Cycling Than Ever

As a result, the women segment has witness steady growth in recent times.

In 2020 the men segment accounts for 45% of global market share. Based on the report published by Department for Transport U.K 2019, UK Men made twice as much cycling trip than Women in a year.

While the total number of men cycling continues to be higher than of women and kids; there was 28.8% growth in women segment in 2019-2020. In respect men segment grow only by 13.2 % in the same period.

Based on the 2020 data report published by Strava, women were 43% more active in 2020 than men. As a result the women segment is expected to grow at CAGR of over 6.8% for the near future.

Number of Bicycles By Country

How Many Americans Are Cycling?

According to a study published by “People for Bikes” who looked into cycling participation across United States in 2014; almost 104 million Americans rode bicycle at least once that year.

Based on recent census data published by Census Bureau of America; 0.5% of Americans above 16 years of age use bicycles as a means of transportation or commute to work.

Which Country Produces Most Bicycles?

China is undoubtedly the largest producer of bicycles in 2021. Although bikes are produced in a dozen of countries worldwide China, India, Taiwan, Japan and Brazil Tops the charts accounting 87% of global production.

While 5 biggest exporter of bicycles by volume are China, Taiwan, Germany, Netherlands and Cambodia. Countries like France, Cambodia and Indonesia shows 15%+ yearly growth in exports.

Today China alone accounts for 38% of total exports ( worth US$3.7 billion ) of bicycles with Taiwan at second place with a market share of 11% in net bicycle exports.

However there has been a gradual decline in domestic demand of bicycles in china. In 1992 china had a percentage bike ownership of 98% which feel down to just 46% by year 2008.

Is Ride1Up a Good E-Bike Brand? Know This Before Buying!

Is Cycling With A Backpack Bad For Your Back?