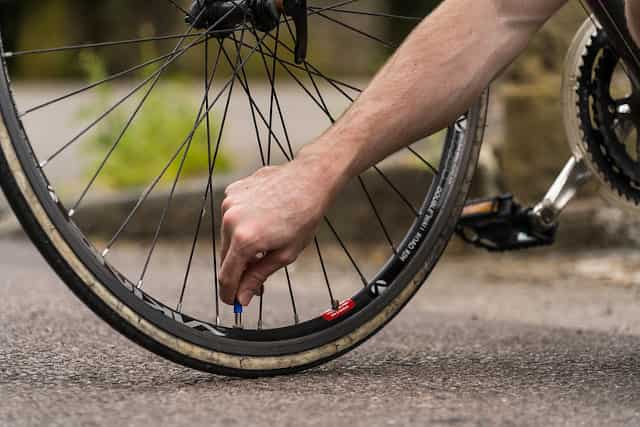 Whether you’ve been riding bicycles for a while or you’ve just started biking to curb that pandemic boredom, you’ve probably seen and even lost one or two of these tiny, black plastic caps. These are called valve caps or stem caps.

These are used to cover the valve stem of bicycle tires and are usually made from plastic but metal variations are also gaining popularity.

An internal thread secures the cap to the end of the stem which juts toward the hub on the inside of the tire rim. Due to their negligible size, some people forget about them.

Some bikers don’t even notice that one or both caps are missing unless they inflate their bike tires. However, if you do lose one or both of these, replacement is easy-peasy and you don’t need to be a mechanic to do it.

Also, bicycle tire valve caps are fairly available anywhere and they come in all shapes, sizes, and prices.

The bike tire valve caps has a significant role in the overall health of your bicycle.

Although small, it has a very important job which is to protect and cover the sensitive valve internals from particles that could get jammed in the sealing surfaces. In short, it keeps the valve clean.

If there is no tire cap, the valve becomes exposed to road elements such as dirt, dust, water, and road salt that could build up and ruin it.

When it is ruined, it will no longer be effective in holding against air pressure or even allow a proper connection with your pump.

The plastic caps protect the stem from dirt and grimes and keep it from oxidizing, which can seize up the stem. It can also help prevent bending of the fragile stem.

But are they necessary? Actually, no they are not.

However, without one, you are exposing your tire valves to corrosion and oxidization. The benefits they provide are clear and it doesn’t take much to attach and take them off.

Can You Bike Without Tire Caps?

Maybe it wasn’t screwed on tight enough, or perhaps you forgot to put it back on. There are times when life (or the ride) gets a little too rough, and you lose one of your valve caps.

You might be wondering if it’s okay to continue driving without one.

The good news is, yes, you can continue biking until you can find a replacement. Even without the tire cap, plenty of cyclists were able to ride their bikes safely and effectively.

Yes, some people do intentionally take them off. Others see these little plastics as historic relics and found them redundant, especially with narrower valves.

Under normal road conditions, some cyclists would do away with them.

However, should you decide to follow their lead and ditch the caps, here’s a tip: If you have Presta valves, keep the caps so you can put them on when you toss your old tube into your bag.

This way, you don’t poke or tear anything. If you have the wider Schrader type, using caps is suggested, just to be safe. But if one is missing, it’s not the end of your biking journey.

Bicycle valves typically come in one of two types: Schrader and Presta. Schrader types are more common and are used on cars and most inexpensive bike models.

On the other hand, Presta types are used for higher-end bicycle tires as they are designed specifically for bikes.

The Schrader type is shorter and wider. From top to bottom, the circumference is typically the same. The thread is located at the top part and the bottom is wrapped in rubber.

A spring-loaded check valve controls airflow and only allows it in one direction. For the air to pass through, pressure must be applied to the inner pin.

Presta type is longer and narrower, about half as wide as a Schrader.

They are usually threaded all the way down and taper slightly toward the top. A lock nut holds the pin closed. Unlike the Schrader, it doesn’t use a check valve and instead seals entirely based on pressure in the tube.

The size of the caps depend on the type of valve you have. All Schrader valves have threads and bodies of a single standard size basing on the exterior.

Therefore, covers and even tools are generally universal in size. Since the dimension for this type of valve is generally the same, caps for Schrader valves are available in one-size-fits-all.

It is not an expensive part to replace. Most Presta types have the same diameter, but the length could vary. Longer valves are utilized for deeper section rims for easier pumping.

Different variants such as threaded and unthreaded with different-size ranges exist. You can also use an adapter to convert Presta to Schrader. This way, you can use a Schrader pump for air inflation.

Due to the nature of the design of a Presta, using a cap is generally not advised though there is still some debate on the matter.

Caps for both types are easily available online or at your nearest bike store. Correct sizing should be taken into consideration when buying replacements.

Can Tires Loose Pressure Without a Cap?

As we have previously established, a bicycle valve stem cap can be a critical component of the tire. Especially for tires with Schrader valves, it acts as a cover that protects the valve from exposure to road elements.

If the valve becomes damaged or dirty, air from the tire may leak out. A dirty valve is sure to degrade and lose air much faster because it will no longer close perfectly.

When it is compromised, replacing the whole tube will likely be your next step. If you have the Schrader type and usually ride in bad conditions or off-road, keep track of your caps.

The same can be said for Presta valves too. If uncovered, just a little grit in the valve can cause a leaking problem. However, others would argue that this would be unlikely because of the valve’s narrowness.

Properly tightened caps can be a life-saver when they develop a small leak by acting as a temporary secondary seal. In any event, valves should be blown clean at least once a month to dislodge dirt.

How Tight Should a Tire Valve Cap Be?

The cap is never intended as an air-tight seal. The valve itself fulfills the work of keeping the air inside the tires.

A cap only needs to be tight enough to prevent the valve core from being pressed down, which, in turn, would release the air. It doesn’t need to be extremely tight.

As long as it is securely in contact with the stem, you will be alright. Be sure to tighten it just right though, Too loose and you’ll risk losing them, too tight and the cap could be really stuck.

Tightly wound caps can be very frustrating when removing during quick tire inflation. Sometimes, they can fuse to the stem. This is especially true if they are made of low-quality metals that tend to rust faster.

Softer plastic types are a great alternative to avoid such events. It is recommended to only tighten them by hand so you can easily remove them for quick repairs while on the trail.

What To Do If The Tire Valve Cap Is Missing?

Losing a valve cap while on the trail might not be an immediate cause of concern. However, the exposure might cause internal damage to the tire.

Again, you can still ride your bicycle even if it doesn’t have a cap on the tire stem. It won’t affect your riding. It won’t even affect the air pressure in your tire as long as your valves are in tip-top condition.

If you do lose a cap, continue your ride and buy a replacement when you have the chance.

Lucky for you, they are not typically expensive, and they are easy to replace. Your nearest bike shop or online bike store offers stem caps in standard and decorative varieties for only a couple of bucks.

If you are in a tight pinch and having exposed valves is too worrisome for you, a small piece of tape to cover it temporarily will do just fine.

Where Can You Buy Valve Caps?

They are available practically everywhere you look online. If you are looking to purchase from a physical store, your nearest bike shop should have them.

Amazon offers a wide variety, with prices ranging from $2 to $30.

They usually come in sets or packs. Some cyclists want to personalize the overall look of their bikes and that includes customizing the tiny valve covers.

Custom caps can be commissioned according to the individuals’ specifications. Basic stem covers are made of plastic, but for added bling, metal caps are also available.

Remember, there is no added benefit for choosing metal other than being more decorative.

Both types fulfill the same function. As previously stated, be on the lookout for covers made of cheap metal as these can rust easily and damage your valve stems.

Be sure to choose the correct size because Schrader type stem caps are bigger and not meant for Presta stems.

Valve covers do not need to always come in boring black plastic caps. They are a perfect way to decorate and personalize your bicycle.

Want to add style to your ride? Changing your cap is an easy and cheap way to go! Others may argue their functionality but they can certainly be one of the most stylish things on your bike.

You would be amazed at the numerous varieties of decorative caps you can buy. Selections range from geeky to LED incorporated ones. Here are our favorites:

Usage of bicycle tire valve covers is not a requirement. Some enthusiasts even promote to do away with them. However, depending on the valve type, some do need to be covered.

It all comes down to your preference as the end-user. Bear in mind, though, tire caps give more life to the bicycles’ tubes, and the advantages of using them are undeniable.

How Often Should You Check Bike Tire Pressure?

How Long Do Bike Tires Last And When To Replace Them

Bike Tire Keeps Going Flat With No Puncture? Learn How To Fix It!