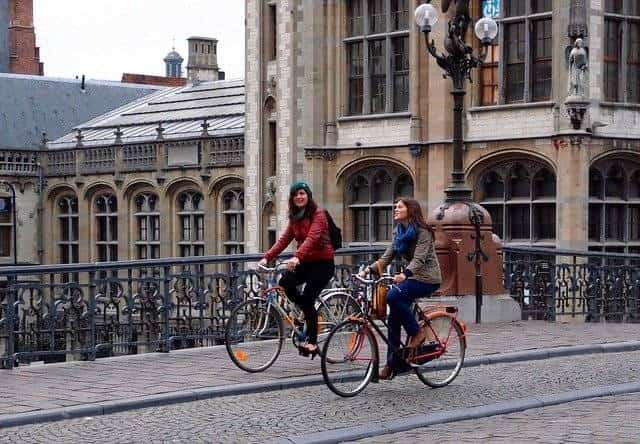 By sonumonuPosted on Posted in CyclingTagged Beginers InfoNo Comments on Can You Ride A Bike On The Sidewalk?

The answer to “Is it legal to ride a bike on the sidewalk?” depends on how old you are and where did you live. Yes riding a bicycle gets complicated on sidewalks as there are various local laws that you need to consider.

Bike riding, particularly in urban or suburban settings, seems to confer many freedoms at first glance. When compared to driving a motor vehicle, bicyclist save money on gas, maintenance and repairs. Instead of searching for a parking spot, you can chain your bike to any likely structure.

Best of all, you can’t get stuck in traffic. When traffic is gridlocked, a cyclist is allowed to hop onto the sidewalk and pedal off into the sunset — or are they?

Legally, riding a bike is treated much similar to cars. They have the same rights as any other vehicle on the roadway, but they also have many of the same prohibitions. Just as it’s illegal for cars to treat the sidewalk like just another lane, it’s sometimes illegal for bikes.

That “sometimes” creates a great deal of confusion. How do you know when you can ride on the pavement versus when must stick to the asphalt?

What about the couriers, kids, and countless others you’ve doubtless seen riding the pedestrian pathways — were they breaking the law? The answers to these questions will vary based on where you’re trying to ride.

When Is It Legal To Ride A Bike On Sidewalk?

To begin with a disclaimer; you are not about to read an exhaustive list of every cycling law in the United States. I say this because that is what would be required to provide a definitive answer for every reader.

Cycling laws numerous and varied. In fact, you may find that no statewide prohibition on sidewalk riding exists where you live; but rather a confusing patchwork of local ordinances allowing it in one city but not another.

For an example, lets look at California. In San Francisco only kids under 13 can ride their bikes on the sidewalk. In San Diego, it’s legal for everyone, except within business districts.

Travel over to Carlsbad, and it’s completely illegal in all circumstances. Not only do the laws vary by city, but they vary by age and district within a given city. In fact, they can be determined by even smaller details.

New York City shares the same age provision as San Francisco; with the added condition that the wheel diameter of the bikes in question is less than 26 inches (0.66 m).

Still, as bicycles are broadly expected to follow the same rules of the road as a car, it is more likely to be considered illegal. In jurisdictions that do not address the issue specifically, that blanket rule technically prohibits you to ride bike on the sidewalk.

The only way to know for sure if this practice is legal in your jurisdiction is to look up the laws in your specific area. The League of American Cyclist has a handy site; that breaks down cycling laws on a state by state basis and is a good place to begin your search.

However, even if you are an area where it is illegal; you’ve likely seen plenty of riders doing it anyway and suffering no consequences.

While this doesn’t make it okay, you may be wondering why it’s outlawed anywhere. As with most vehicular ordinance, the main motivation is safety.

The Dangers of Riding Bike on Sidewalk

The condition of roadways is far from perfect. There are rough patches, cracks and potholes to contend with even before you factor in other drivers.

Even when bicycle lanes are factored in, for many of us it seems intuitive to believe that the sidewalk is a safer alternative for cyclists. The truth is that there are even more hazards lurking off the road than on it.

Sidewalks are designed for pedestrian traffic.

While obvious, we have to explore what this means cyclist. Roadways, while imperfect, are far more uniform surfaces than sidewalks.

Think about the last time you took a stroll. You were probably walking on a series of concrete slabs, each separated by a gap. How many of those slabs were cracked and uneven? Were there weeds growing up through the gaps? Were there trees close to the sides and hanging low overhead?

Perhaps there were children’s toys scattered about, or sudden changes of elevation as the walkway was bisected by a driveway.

The concrete itself could vary from smooth to rough, or go from paved, to dirt, to gravel. All of these conditions are fairly simple to navigate for someone on foot, but cyclists traveling at 10-20 mph can be seriously injured by any combination of the above. Sidewalks are simply not optimized for bike travel.

Pedestrians expect to encounter vehicles on the road.

Because of this, their awareness is focused on nearby road traffic and upcoming crosswalks. They are unlikely to expect a vehicle of any kind to be approaching at high speeds along the sidewalk, and are therefore rarely prepared to take fast action to avoid collision.

Moreover, the aforementioned fences and trees can limit their options when it comes to moving aside.

Drivers aren’t looking for vehicles on the sidewalk.

This is particularly dangerous when it comes to driveways. When pulling out of a driveway, the average driver does a check for pedestrians and animals coming down the sidewalk.

They know how fast these things can move, and so if a quick look shows nothing in the danger zone, they are likely to quickly drive to the curb.

In instances where no cars are seen, they may not even pause there. A bicyclist can find themselves in the path of that car. Their speed means they may be unseen when the driver checks for danger, yet move into harm’s way when the car is in motion.

Conversely, when on the road bikes are afforded ample space to maneuver, allowing them to avoid potholes and unexpected obstacles.

Drivers near them are able to properly consider their speed and location, creating a safer experience for all parties. The danger is lessened for pedestrians as well.

All that said, it’s not surprising that riding a bike on the sidewalk is prohibited more often than not.

However, since it is legal in certain places and circumstances, it’s worth considering how you can maximize your safety if you choose to do it.

Should You Ride Your Bike on The Sidewalk?

For most of the time outside of major business districts there is nothing stopping at least legally to ride your bike on the sidewalk. But that does not means you should always take the sidewalks and make things hard for the pedestrians and sometimes for yourself.

Sidewalks are simply not built with bicycles in concentration so it’s always gonna tough riding. But still its better than the busy traffic and people continue to use them wherever possible.

Where there are bike lanes or simply less traffic on road; you should simply avoid taking the sidewalks. It might be acceptable for kids but as a grown up there isn’t much excuse.

Further taking the sidewalks won’t save you from encounters; if that something you are afraid of. In fact you have to be more conscious and alert when you ride your bike on the sidewalk.

Even dedicated bike lanes are not always the solution. After all, they came at the price of a dead traditional parallel parking system on road. Since they are much closer to the regular traffic they can be still intimidating sometimes. Then there are times when you are left with no options than to go for the sidewalk.

Now that you know the ways in which sidewalk cycling can be dangerous, its easier to come up with ways to lessen or avoid those dangers. Here are a few tips that should keep you pedaling along safely.

Go slow: It can be exhilarating to speed along on your bike, but when you’re on the sidewalk your speed determines your risk.

The faster you’re going, the less time you have to react to the sudden appearance of obstacles. Likewise, a collision or fall will do significantly more damage at high speeds.

By slowing down you not only give yourself a better chance to respond to sudden changes, you give pedestrians, drivers, and other riders that chance as well.

Signal often: If you see pedestrians ahead, don’t wait until the last second to shout out to them or ring your bell, and definitely don’t ride upon them without any signal at all.

Remember, even riding slowly, you’re moving at a quicker pace than they are. Startling them increases the chance that they will make a sudden unpredictable move, leading to possible collision and injury.

Stop at driveways that have a car in them: This may seem annoying, but the truth is you may not become aware that someone is in the car until it’s too late.

A driver in a rush can start-up and move in seconds, which means a silent car with no lights on can become a deadly obstacle before you know it. Treat driveways like crosswalks, and be sure it’s safe before crossing over.

Only cross the road at crosswalks: Riding out into the roadway at an undesignated point is a risk for anyone. In the same way, a pedestrian can get hit trying to cross in this way, a cyclist can.

You may feel emboldened by your speed and maneuverability, but entering traffic at a point where drivers are going full speed, and not expecting you, is a recipe for disaster.

For pedestrians trying to validate sidewalk, riding seems to be unethical and morally incorrect. But as far as the local laws go yes you are allowed to ride your bike on sidewalks; at least in most US states as long as you are watchful of other pedestrians and go slowly on your bike.

Just make sure you obey your local laws as they sometimes contradict and local laws are applied. Try to ride your bike on the sidewalk only if there is no better alternative in the form of dedicated bike lanes, connecting streets, and bike-friendly roads and cities, or the way is obstructed.

Is WD-40 OK For Bike Chains? Truth About WD-40 And Bike Chain

Is it OK for a Man to Ride a Step-through Bike?