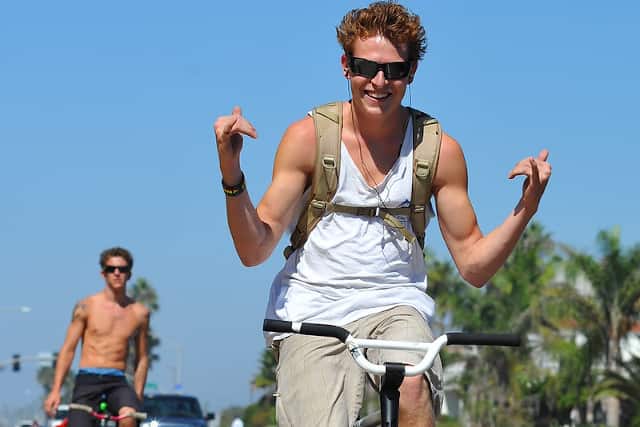 By sonumonuPosted on July 12, 2022Posted in CyclingNo Comments on Is it Illegal to Ride a Bike with No Hands?

One of the most common tricks that children and teens learn to do on a bike is riding it without holding onto the handlebars. This trick is easy enough to do, especially given how well-balanced bikes usually are, but that doesn’t mean that it’s legal.

In fact, though riding without hands can be fun, or even useful if you need to do something with your phone, take a drink, or adjust your headphones, it is illegal in most places in the United States.

However, there are some exceptions; these laws are only applicable on streets and roads and not on your private property. Further there are states like Arizona, Colorado, Delaware to name a few where its still legal.

Just because riding a bicycle without hands is perfectly legal in your state does not mean you should always do so. Be considerate of your safety and risks of accidents before trying such acts.

Why Ride Without Hands on the Handlebars?

Riding bikes without hands on the handlebars can be a very useful skill. As a kid, it was probably a rite of passage in your neighborhood.

As an adult, it probably isn’t something you think about much unless you are a professional biker and routinely need to use both hands to eat, change clothes, or open up a bottle of water.

Riding a bike with no hands is a skill that anyone can learn, but be warned, there can be repercussions if you’re caught without your hands on the handlebars in traffic.

What’s the Problem with Riding Without Hands on the Handlebars?

Just like cars, there are rules about how to ride a bike safely in just about every jurisdiction in the United States. These are there to protect both bystanders and those riding the bikes from injury or even death.

These rules and laws can vary from wearing a helmet, riding only in designated lanes, or even potentially requiring a rider to keep both hands on the handlebars at all times.

These laws might seem unnecessary or overly cautious, but they are there to protect you and those around you.

If you want to ride your bike in public, it is important for you to know the laws and rules in order to protect yourself. Breaking these laws can potentially result in fines and fees that must be paid off.

Before you ride, especially as an adult in traffic, make sure you know the rules in your area to avoid doing something that could get you into trouble, like riding your bike with your hands off of the handlebars in traffic.

This one simple mistake can win you a ticket in many areas if you happen to do it in front of a police officer.

Riding a bike without hands might seem harmless, but it’s far from it. The handlebars are there for a reason, granting control over the bike and access to the brakes, especially since most bikes utilize handlebar brakes.

This is especially relevant when attempting to brake or turn. The handlebars allow a biker to control the trajectory of the bike instead of letting it go wherever the terrain takes them.

When your hands are off of the handlebars, even a small bump or rock in the road could send you flying off course into potentially dangerous territory, or cause you to fall off and injure yourself.

What Law Says about Riding a Bike With No Hands?

If you want to look at sheer legalities, then yes, it is illegal to ride your bicycle with no hands in most states.

You may be ticketed and fined, or at the very least, warned, depending on the officer and whether this is your first offense. Of course, with that said, the legality will also vary somewhat from state to state, or even from county to county in some instances.

Please check your own state, county, and city for rules relevant in your jurisdiction before deciding to ride without hands on the handlebars.

Which States Make it Illegal to Ride Without Hands on the Handlebars?

In these states, penalties can vary widely. In the remainder of the states not listed, it is not currently illegal to ride a bike with no hands.

Some states will require you to control your bike with both hands while others may require just one hand to control the bike safely.

With exact legal sentence “No person operating a bicycle shall carry any package, bundle or article which prevents the operator from keeping at least one hand upon the handlebars.”

Benefits of Cycling With No Hands

If you really aspire to become a safer and better cyclist, you need to develop your confidence. In addition, you’ll have a good opportunity out on your bike because you won’t be worrying as much.

It’s a terrific approach to gaining self-assurance while gaining the skill of cycling without the use of your hands.

To put it another way, when cyclists are confident enough to let go of the handlebars, they have mastered the bike’s motion. It may take quite some time before riders can perform such tricks.

They can go wherever they like without worrying about getting lost or falling off their bikes.

Knowing to ride a bike without using your hands is a discipline that can be applied immediately and will help you become a better cyclist overall. Better body awareness means better bike handling.

Hand-free bicycling has been shown to increase overall awareness and, in turn, balance.

Since this is the most challenging method of riding a bike, it also has the added benefit of improving your body’s synchronization with the bicycle.

Some seasoned cyclists can ride without using either of their hands because they have reached a state of peak coordination. Don’t resort to this if you’re a beginner cyclist or if you have any lingering fears about the bike.

3. An excellent way to stretch/relax

Pros who are riding a bike need to put their upper body weight in front. This is so because it helps them maintain their equilibrium and speed during the journey.

Yet, carrying around extra pounds can be a significant source of discomfort and fatigue for your back and body. It’s positive that they can release their grip on the bars to stretch.

This strategy has greatly benefited bikers because it allows them to rest and refuel as needed during long rides. Nonetheless, they often only carry out such manoeuvres when the roadway is empty and spacious. You may rest assured that from this point forward, you will fully use this life hack.

4. Allows you to do other things

It is a very satisfying sensation to be able to ride a bike without needing to put your hands on the handlebars since it allows you to multitask while you are out on your ride.

You are free to attend to the mundane things that have been occupying your thoughts throughout the ride, such as rubbing the itchy spot on your back or returning the earphones that slipped out of your ears.

As was indicated in the previous advantage, the majority of professional bikers utilize their downtime to find a way to deal with the aching in their backs.

Although it might not seem like much, cyclists value even the smallest amount of free time they get for their hands because they spend so much of their time pedaling with their feet.

The bottom line is that in many areas across the United States, it is illegal to ride a bike without holding the handlebars at all times.

As the rider, you must do your due diligence to understand the laws and regulations in your area to avoid breaking them. It’s not a very good defense to say you simply didn’t know the rules when it is your job as the rider to know them to ride your bike safely.

If you’re not sure what the rules are in an area that you are riding, the best policy is usually to assume that yes, it is illegal to ride your bike with no hands on the handlebars and proceed accordingly.

As more and more areas decide to make riding without hands illegal, it’s usually better to be conservative about your choice until you know otherwise.

Riding a bike with both hands on the handlebars is, by far, the safest option whenever possible.

Make sure that if you do choose to lift your hands from the handlebars, you understand the risks and how to properly control your bike to avoid an accident. And, always remember to ride your bike with a helmet!

Can You Ride A Bike On The Sidewalk?

Is it OK for a Man to Ride a Step-through Bike?