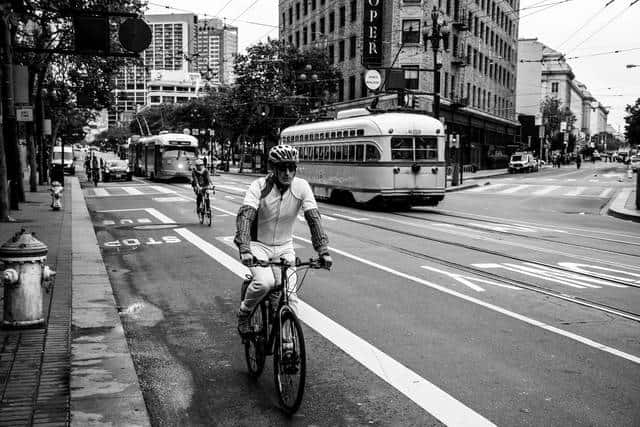 When it comes to buying the best bicycle for commute deciding between the flat bar vs drop bar; is one the important decision which involves a lot of self doubt and confusion.

With all the technological advancements the world has seen in the transportation field, the bicycle is still the most efficient vehicle mankind has made.

Cheaper to build and to maintain than any motorized vehicles, bicycles are more maneuverable, less obtrusive, and, crucially in a world concerned with the impact of pollutants, they output zero waste. It’s no wonder that hundreds of thousands choose to tackle their work commute astride a bike.

However, choosing to ride your commute is only the first choice of many. Bikes come in many form factors, with each discreet part offering further variation to fine tune your experience.

Key among these choices is the type of handlebar, as this effects your posture, speed, and ease of maneuverability.

While there are numerous types of bars, when it comes to commuting, the flat bar vs drop bar debate reigns supreme. Why is that the case? And which one is the better choice for commuting?

It’s a more complicated question than it seems, and the answer will depend largely on the nature of your commute. So, let’s begin by breaking down the commuting archetypes.

No one has the exact same commute as anyone else. Even if you were taking the same route, riding alongside a friend, their experience of that ride will be different from yours. This is not just because each bike performs a little differently, but also because our bodies handle the act of riding uniquely.

That said, commutes can be categorized broadly based on a few characteristics when the aim is choosing the handlebar type. Your commute is either urban or rural. It can be a combination of the two, but when it comes to handlebar choice, it’s best to be outfitted to handle the most demanding environment you will encounter.

If your route to work takes you through a typical city or suburban landscape, then you should qualify the entire trip as urban. Why? Well, let’s lay out the characteristics of an urban commute:

When you look over that list, you can see that an urban commuter’s greatest asset is quick, reliable handling. You are constantly angling, turning, and weaving around obstacles.

At the same time, they stop frequently. This seems like an annoyance, until you consider that this provides built in breaks during the trip. Waiting at a stop sign? Perfect time to stretch, let go of the handlebars and flex your hands to keep them from getting sore and stiff.

If your commute primarily involves riding down long winding roads, alongside forests, farms or open fields, or through sleepy one-light towns, you are a rural commuter. In that case, your commute involves:

Rural commuting is characterized by longer distances and fewer impediments. By nature, it involves riding at higher speeds, and is less concerned with constant maneuvering in tight spaces.

That being the case, while you can stop any time, the loss of speed and cruising momentum means you won’t often choose to do so. In that case, it would be beneficial to be able to safely alter your posture and grip on the go, to avoid becoming uncomfortable during your trip.

Now that we’ve outlined the needs of each commute, let’s see which of the two handlebar types is best suited to these requirements.

Flat handlebars are so called because they angle neither upwards nor downwards. When viewed head-on, they cross the top of the bike in a straight line. In reality, while they don’t break the vertical plane, they do tend to be back-swept, which improves the grip positioning.

Flat bars have their grips placed at the ends of the bar. Riding a bike with this type of handlebar construction places you in an upright position with your arms spaced wide in front of you. How do these features relate to commuting? We’ll break them down into 3 categories: posture, steering, and grip.

Posture: The upright posture that comes naturally when riding with a flat bar is more comfortable and better for the back overall. When riding, your aim is to keep your spine in a neutral position, meaning that you are not hunched, but have a flat back, and your spine is aligned between your hips and your shoulders.

However, holding any one position for the duration of a long ride will cause soreness as all the same muscles are being used in one way the entire time. Being upright also increases your wind resistance, making it noticeably harder to reach higher speeds beyond the 15mph mark.

Steering: The typical width of a flat bar is 60 cm (23.6 in). Steering a bike involves using the handlebar to exert leverage on the wheel. The further from the axis that the lever is engaged, the less energy is required to create a given amount of force.

In other words, it takes less energy to steer when using a flat bar because of its width.

Grip: One downside of the flat bar grip is that there is one optimal way to hold it, and any other way reduces your comfort and control. This becomes an issue when riding long distances, as your hands will become sore and there isn’t much you can do about it, other than to stop and give them a rest.

Taking these things into consideration, flat bars are well suited to urban commutes. They provide improved maneuverability, and benefit from the frequent stops built into that environment.

By contrast, the upright posture negatively impacts your ability to take advantage of the higher speed allowance of rural routes, and being essentially locked into position ensures some level of discomfort during a long ride.

Drop bars are more involved. They start out like a flat bar where they connect to the stem, but the ends curve forward, then drop down and sweep back, creating a C-shaped handle on either end.

The brakes are positioned just at the top of the downward curve. These bars have four separate grip positions: the “tops”, the “hoods”, the “hooks”, and the “drops”.

The “tops” are narrowly spaced grips along the horizontal part of the bar, close to the stem. The “hoods” are more or less the standard grip, where the hands are placed atop the brake hoods.

The “hook” position is located within the arch of the curve’s interior, and gripping the “drops” means holding the bottom portion of the curve that sweeps back towards you.

What does this curious construction mean for the commuter? Let’s see how it differs from the flat bar in the same 3 categories.

Posture: With 4 different ways to hold the bar, you end up with 4 slightly different postures. Gripping the “tops” yields a similar upright posture to a flat bar (but sacrifices safety and control, as I will get into shortly).

Steering: Drop bars usually span 46 cm (18.1 in) in width, measured from hook to hook. That’s already about 7 in narrower than a flat bar. If you grip at the “tops”, each hand could move another 5 in towards the middle of the bar.

Control when using this grip is abysmal, making it only acceptable in a situation where you have a relatively straight and unobstructed path. The other grip positions are much better, though while your control is comparable to that achieved with a flat bar, it isn’t quite as good.

Grip: Remember the problem of soreness from holding the same position over a long ride? Having 4 distinct ways to grip the bar allows you to alleviate that soreness on the go.

This feature is made for comfort during distance riding; and also allows you to approach different inclines from more advantageous positions.

Based on that, drop bars seem made for distance and high speed, the two factors most associated with rural riding. The sacrifice in steering control is less of a drawback in that environment as well. However, it must be noted that the “tops” grip not only diminishes steering, it also places the brakes out of immediate reach.

Pros of Flat Bar for Commuting

Thanks to the wider grips on these handlebars a flat bar offers you better maneuverability and control; than any other bar type ( Drop Vs Flat Vs Bull Horn ).

These are extremely helpful when steering through heavy traffic where no one is going to make way for a bicycle commuter; you have to make it yourself. Then it is also helpful in mountain terrain with bumps and irregular terrain; as you get more control and grip from your bike.

Further because of their higher upright position they are more comfortable to ride; except for the hand getting numb when cycling for more than 30-45 minutes due to lack of different hand positions.

The comfortable ergonomic grip offers more natural hand position and really last long. Then there is other advantages like; plenty of room for accessories, low cost and easy repairs, easy access to the brakes, it offers better visibility forward and feels confident to ride for beginners.

Pros of Drop Bar for Commuting

So its not just the aerodynamic design that helps you with speed but also powerful pedaling position. Thus when facing those strong stormy headwinds nothing better than a drop bar.

Then these are narrower by design ( About 150-200 mm narrower ) than most flat bars; making it easier to pass through tighter space with safety. Then there is other advantages like the multi-hand position that prevent numbness and its cool looks that add to its appeal.

So, does that mean there is no “best” bar for commuters, and instead one for each type of commute?

Flat bars and drop bars do by nature perform better in different environments, but the reality is most people aren’t going to have two bikes to ride: one for the town and the other for country.

Instead, you should have one that will perform admirably in most circumstances, with a premium placed on features that impact your health and safety.

Flat bars are the clear winners when things are viewed in these terms. Just think: riding a bike with drop bar handles into a hectic city environment is far riskier than taking a flat bar bike into the country.

It’s that ability to crossover into the other’s ideal territory that gives flat bars the overall edge and makes them a commuter’s best choice. But most professional riders still prefer to use drop bars as they like to commute less and travel more for longer distances for which drop bar is better.

Are Mountain Bikes Good For Urban Riding? | Commuting On A MTB