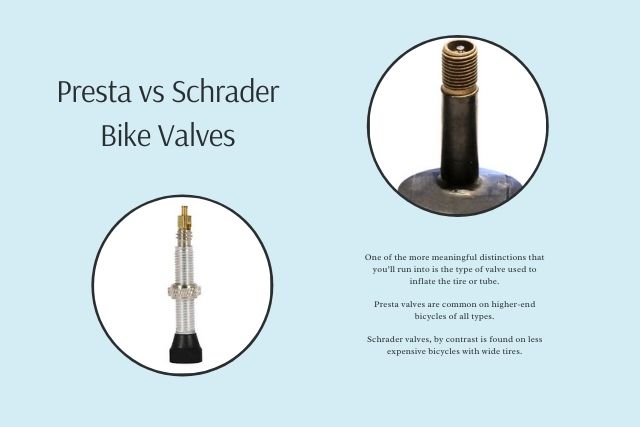 By sonumonuPosted on Posted in CyclingTagged Beginers InfoNo Comments on Presta vs Schrader Valves – What Are The Differences?

If you have been into riding bikes for a while you must have noticed the difference between bicycle tire valves. There are just main types; presta and schrander valves and your bike may have any one of them.

One of the more meaningful distinctions that you’ll run into is the type of valve used to inflate the tire or tube. While there aren’t a lot of advantages or disadvantages to the mechanical operation of either type of valve.

Having an unfamiliar valve can be an embarrassing problem that might keep you from inflating your bike’s tire without proper knowledge or equipment.

Trying to use a new valve for the first time?

Need to decide what type of valve you want on your new inner tubes? Here’s everything you need to know about Presta valves, Schrader valves, and the important differences between them.

We’ll go over adapters, functionality, and more so that we pump up our tires and replace tubes the right way.

What Are The Different Bike Tire Valve Types?

Almost every bicycle tire uses one of two valve types: a Presta valve or a Schrader valve. Presta valves are common on higher-end bicycles of all types, but they’re virtually mandatory on road bikes with thin rims.

Schrader valves, by contrast, tend to be found on less expensive bicycles with wide tires. This means you’ll see them on cruisers, mountain bikes, and hybrids, especially if they’re entry-level options.

But some bicycles may also have a third type called “Dunlop Valves” especially if the bike is from a developing country.

Presta valves feature threaded metal stems that are topped with a threaded nut.

This nut can be loosened to allow the valve mechanism to be pushed down, allowing air to be let in or out of the tube or tire. Presta valve stems are thinner than Schrader valve stems.

Since bike rims have to have a hole to accommodate the valve, Presta valves work well on thin rims and tires. The smaller the hole, the less the structural integrity of the rim is compromised.

On extra thin road bike wheels, this can be a major concern.

If you’ve inflated the tires on a car, you’re probably familiar with a Schrader valve. These valves have an internal mechanism that must be depressed to allow air in or out of the tire.

Schrader valve tips are much more universal than Presta valve tips, so it’s a bit easier to inflate a tire system with Schrader valves in an unfamiliar locale.

Schrader stems are thicker than Presta stems, necessitating larger holes in your bike’s rims to fit the valve.

In bikes with wide rims, like cruisers, hybrids, and mountain bikes, this isn’t much of a concern, but it can be a dealbreaker for road bikes.

Dunlop valves also referred to as the English or Woods valves are a kind of pneumatic valve stem that is used on the inner tubes or tires of bicycles.

Their main function is to control the airflow into and out of the tubes. They can allow air to be added or removed from the tube as well as stop the air from escaping.

The Dunlop valves are used in various countries like Japan, India, Korea, Pakistan, and in most European countries.

They also remain to be the most popular choice in many developing countries because of their practical design and cost-effective purchase price.

What Are the Differences? Presta Vs. Schrader Valves

1) Presta valves have a much thinner valve

The size of the valve system is the most visible difference of Presta and Schrader Valves. Presta valves have a thinner valve system compared to Schrader valves allowing them to fit through smaller holes.

Compared to other valves in tires, Pesta valves are more suitable for road bikes because their size fits the small holes of the very thin rims of these bikes.

They also preserve the structural integrity of the thin wheels making them a safer option to prevent intense damage and crashes caused by ineffective wheels.

Although Presta valves are a better option for road bikes, Schrader valves remain to be a more widely used option because they can also be used in car tires.

This makes Schrader valves suitable with any car tire pump or gauge so you can inflate your bike with a car compressor that you probably already have in the back of your garage or are commonly available in gas stations.

On the other hand, Presta valves need a special bike pump or adapter to inflate tires.

Shrader valves use a spring-loaded check valve or simply called a check valve. This feature allows them to effectively control the airflow inside and outside of the tube.

Ultimately, they allow airflow in only one direction and prevent backflow of air so you can inflate your tires easier.

Meanwhile, Presta valves don’t use a check valve. Instead, they feature a valve core nut that keeps the central pin in place.

To control airflow in these valves, you have to tighten the core nut to prevent the air from passing through and loosen it to allow the entry of air into the valve.

Presta valves are designed with a valve rim nut to prevent the valve from being pushed into the rim which can cause damage to the tire.

As you inflate the inner tire, there is a chance that the valve sinks into the wheel.

By keeping the valve rim nut tightened, you can avoid this situation and pump up the tire successfully.

The valve rim nut also keeps your pump and valve stem firmly connected making it a handy feature, especially for Presta valves and other short valves.

The stem of Schrader valves is larger in diameter compared to other valves. They offer a more robust build and are also less prone to damage or bending.

In addition, they are designed with their valve core inside their stem. This design makes the core well-protected and relatively difficult to damage.

On the contrary, the valve core pin on Presta valves is on their outer part. Hence, the core pin is more prone to damage when inflating through the valve.

It can also be damaged easily when the cap is not tightened well while cycling.

Compared to Schrader valves, it is easier to let the air out of a Presta valve. To let out the air from Presta valves, you simply need to unscrew the nut on top of the valve and lightly tap the valve head to control the flow of air.

On the other hand, Schrader valves require a tool to depress the valve head inside the core and let the air out faster and easier.

Without this tool, letting the air out of the Schrader valve can be relatively difficult.

Which is Better Presta or Schrader Valve?

Bicyclists tend to prefer Presta over Schrader when they have the option, but it’s usually not a strong preference.

Presta and Schrader valves are very, very similar at performing key valve duties like keeping air in and allowing you to manipulate the air pressure of your tire in a controlled way.

If you’re considering which type of valve to purchase, try to stick with the one that your bike’s wheels recommend. If your bike came with one valve type, keep using it.

Presta valve stems can fit through the bigger holes that Schrader valves demand, but they’ll wiggle a lot and can be damaged by the loose fit.

You can fill the gap with a carefully sized o-ring, sure, but it’s probably best to just stick with a Schrader valve and skip the hassle. Similarly, some cyclists will occasionally drill out the Presta-sized holes in their rims to accommodate Schrader stems.

This shouldn’t be something you undertake lightly, as it’ll make your rim much weaker around the expanded hole.

Nevertheless, if you find yourself in a situation where you need a Schrader valve for easy compatibility with local pumps, it’s a thing you can do.

Again, if sticking with Presta tubes is an option, you should probably do that instead. It’s a lot less dangerous and nearly hassle-free.

Most Pumps Will Accommodate Either Valve

As long as your pump is designed to work with bicycles in the US, you do not need a special pump to inflate a Presta valve. Many larger floor pumps have two holes: one for Schrader valves and one for Presta valves.

Some have a lever you can use to change which valve your pump fits. Hand pumps and some small floor pumps often have an internal part that you can reverse to fit the other type of valve.

You can usually disassemble these pumps by hand to access the part, reverse it, and then re-assemble the pump in a matter of seconds.

Check out the instructions for your particular pump to check if it has this sort of functionality.

Pumps and gauges that were designed for cars, however, might not have the ability to work with Presta valves. If you find yourself wanting to use these accessories, consider purchasing an adapter.

Adapters screw on top of your Presta valve and allow it to work flawlessly with any pump that can fit a Schrader valve.

A number of companies produce very inexpensive adapters that you screw on your Presta valve system to enable it to work with Schrader pumps and gauges.

These adapters enable you to have all of the advantages of Schrader valves without replacing them. They can be left on your bike while you ride, removed after each use, or kept in your trail bag for emergencies.

If you’d like, you can return the adapter to the top of the valve and screw it in so you don’t lose it.

Adapter packs like this and one from HZJD available on amazon are very inexpensive online. You’ll get more adapters than you need for just a few dollars, giving you lots of flexibility with what pumps and stems you use on your bicycles.

Bikes with skinny wheels and fancy tires tend to come with Presta valves, while cheaper bikes with thick tires usually use Schrader valves.

There aren’t a lot of good reasons to switch from one valve type to the other, especially because most bike-centric parts can easily accommodate both valves.

In general, stick with the type of valve your bike came with. If compatibility is an issue, consider purchasing a cheap pack of adapters to let you use your car pumps and gauges on your bike’s Presta valves.

Is WD-40 OK For Bike Chains? Truth About WD-40 And Bike Chain

All About Oval Chain rings And Why You Should Have One