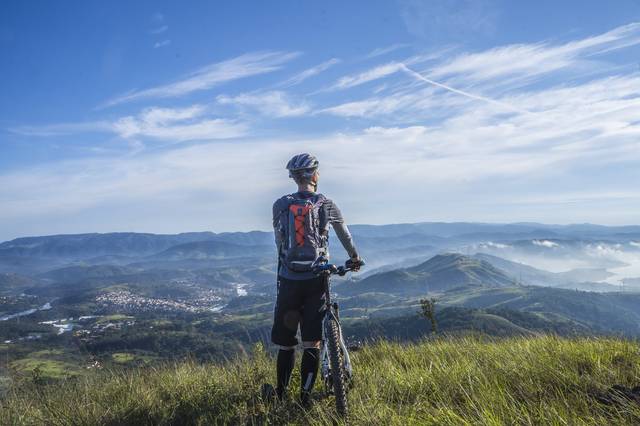 By sonumonuPosted on Posted in CyclingTagged Beginers Info, Hybrid BikeNo Comments on Can Hybrids Be Used For Off-Road Trails?

Versatility is one of the main features for which hybrids are popular among bikers. They are designed for riding on smooth roads as well as touring on wet patchy streets.

As the name suggests hybrid bikes are designed in a way to perform moderately well on both paved roads and unpaved rocky surfaces. It has got both the best and the worst of these two bikes making it somewhat starter bikes for beginners looking to explore anywhere with ease.

So yes, hybrid bikes can be used for off-road trails. Being a good mix of mountain and road bike; it’s a great option to ride under varying conditions ( mix of On-road, off-road ride ).

With a comfortable upright position, it is somewhat easier to ride. I have personally used them for long-distance tours, off-trail rides, and for city commute over these years; they were just as good as they should be.

But if you need more aggressive treads for steep hills; I would prefer a mountain bike than a hybrid.

There are different models of hybrid bikes available in the market. Their suitability for trail riding can differ with each model depending upon their drive-train, tires, suspension, and the material of their frame.

For an average rider looking for a nice lightweight bike to ride on a dirt road, dusty tracks, and gravel, a hybrid bike would be the right choice. On the downside, it has tire width in between the road and a mountain bike; so not the very best for either paved roads or unpaved trails.

How Does a Hybrids Compare to Mountain Bikes

A hybrid has a similar design of the cyclocross bike; much similar durability and feel of a mountain bike and a wheel of a road bike.

Certain models of these bikes have several features required for off-roading like suspension and drivetrain but their tires may not allow them for riding on aggressive trails like a mountain bike.

As tires, as well as overall design, are the weak point for hybrids as compared to mountain bikes then instead of riding on tough terrains like mountain bikes you should use them on moderately rough tracks.

Still, you cannot say that a hybrid bike is not suitable for off-roading as it can do well by equipping it properly

You can use hybrid bikes on different types of trails by upgrading them appropriately as they can be upgraded easily as required. But, their performance like mountain bikes on extremely rough terrain is doubtful even after suitable upgrading; so don’t take them for a ride up a steep mountain.

Though mountain bikes can easily climb rough terrains thanks to their suitable gears and drivetrain. Most other bikes including hybrids also have gears that can be equally advantageous for them on such tracks.

But hybrids may not have as low gear ratio as required by a mountain bike for off-road trails as normally they are to be used on city roads where a high gear ratio is required.

Most hybrid bikes are built for speed, ease of use and comfort thus does not includes same level of drive train or gears dedicated to off road cycling.

This gearing configuration with a much higher point start gives it a great advantage in urban and sub urban environment but not on tough mountains.

This high gear ratio of hybrid bikes makes them unsuitable for rocky terrains with extreme irregularities. The large ring of the chain is another problem restricting them from performing like a mountain bike.

Further, there is the issue of obstruction to chain drive; as while changing gears, their chain can sometimes move closer to the ground which can collide with any obstruction.

A mountain bike is subjected to extreme forces because of the uneven terrain they face. Suspensions provides you and the bike the shock absorbing ability to neutralize these forces.

Without suspension a sudden jerk from rock and pavements might just hurt in the most sensitive place. A regular mountain bike has both front and rear suspension for added control and safety.

On the downside it unnecessary increase the weight of your bike. The rear suspension is mostly designed to be part of the frame; while the front suspension is much like you see in motorcycles.

Most hybrid bikes that are commercially available in the market either don’t have any suspension or just have a simple fork suspension upfront.

While it helps them keep light and more simple by design; it is what makes them unsuitable for tough terrains like mountains. That is why even after having most features of a mountain bike hybrids are not suggested for the hilly bumpy terrains; otherwise, they both perform quite similar.

The design of the frame for most of the hybrid bikes is closer to the frame of cyclocross than mountain bikes as they are usually used on urban roads, gravels, dusty trails and semi hilly terrains.

On the other hand mountain bikes go for the most challenging terrains with rocks, large bumps and mountains.

For this reason the stand-over distance for the clearance of a tube decreases which makes it unsuitable for mountain rides. More clearance distance is required for the bikes used on extremely rough tracks.

In this way, most of the hybrid bikes may not be suitable for off-road trails due to the design of their frame.

On the other hand, some of the hybrids have designed much similar to mountain bikes and also include front suspension. They can be easily upgraded to fit for this purpose while many others not.

So, while purchasing a hybrid bike you should check whether it can be upgraded for rough tracks or not. You should also ensure that a suspension fork can be added to it when required.

Normally, the standard 700c tires are used in hybrids that are thinner than the tires used in mountain bikes but they are a bit wider than street bikes.

Moreover, the design of their treads is not thick enough to grip the rough tracks more effectively.

The wide tires of mountain bikes absorb more shock and give more traction due to the higher volume of air in them as compared to the tires of hybrids.

The tires used with hybrid bikes are good for dusty tracks, gravel grounds, pavements, wet surfaces but certainly not as good for rough mountain tracks. You can certainly take your hybrid off-road with ease but make sure it’s not too rough, bumpy, or hilly to account for unwanted jerks.

But you can still use your hybrid bike for off-road trails by using tubeless tires as they are a bit flatter than usual hybrid tires and by lowering the air pressure in them you can use them on moderately rough tracks.

In this way, you can surely ride your bike comfortably on slightly bumpy tracks if its frame provides enough clearance from the ground and you upgrade its tires.

A hybrid might not perform as effectively as mountain bikes on extremely rough trails; but are quite comfortable to ride and can go far distances. I have personally taken them as far as 80 miles going through paved, unpaved roads on a biking event in my home town.

You cannot use mountain bikes for long-distance rides due to their heavier weight and extra friction. A hybrid bike can give an extremely dependable performance.

Their comfortable seats, upright handlebars, front suspensions, and mounts for racks/bottles makes them perfect for touring. Designed for comfort and leisure these are quick, comfortable, and easy to ride. Moreover, the wearing out rate of hybrid bikes is much less than mountain bikes.

Mountain bikes, as the name suggests are great for hills, off-road biking; and tracks filled with gravels, dust, and soil ( build for anything but tarmac surface ). Hybrids too can be used for the same except for the hill.

Hybrids are practical by design as for the majority of riders they need a bike that is easy to ride, beginners friendly, comfortable, last longer and support multiple terrains.

A regular biker may need to commute, go for city tour, log rides and village dusty tracks. With hybrids, you did not need to add or subtract any feature for everyday use.

It is more like hop on to the seats and gets going. Further for most of the time, you might not need to ride on hilly tracks or go for adventure riding unless you are a professional.

A mountain bike is great for off-road trails but equally worst for commuting in cities or for a long ride. That is why the first bike should be a hybrid and others as specialists.

Thus it can be concluded that hybrids can be used for off-road trails with moderate roughness even if they are not designed for them.

Some of the hybrid bikes can be taken to rough tracks like dirt roads; gravel paths as well as a bit rocky roads, even without any upgrading. So, you can expect reliable performance from your hybrid bike; if you want to have an off-roading ride on a nearby track.

Are Road Bikes Much Faster Than Hybrids?

Is Hybrid Bike Worth It? Should You Buy & What It’s Good For